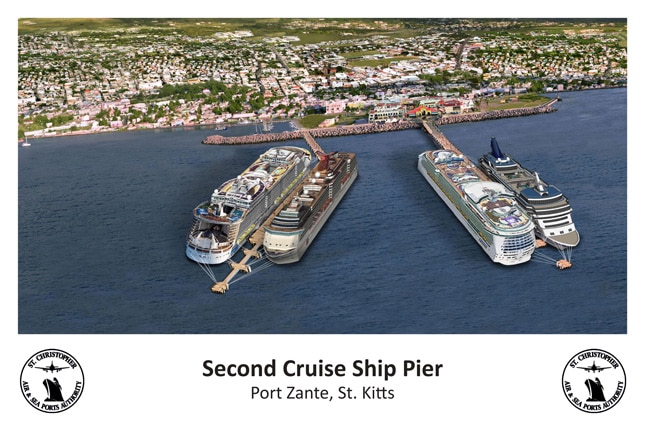 BASSETERRE, St. KITTS (SCASPA) – APRIL 18, 2018 – The St Christopher Air & Seaport Authority (SCASPA) became aware of certain statements made recently by a former minister on his radio programme, “The Operating Room” and have decided to provide the public with information on the Second Cruise Pier Project at Port Zante. As it is necessary for SCASPA to provide the public of the Federation of St Kitts & Nevis with the facts in relation to the status of the Second Cruise Pier Project.

As the Second Cruise Pier Project progressed; the Contractor (CCC) has made claims for additional works under the General Conditions of Contract, these claims are currently under the careful consideration by SCASPA’s consultant Project Managers, ADeB Consultants Ltd of Jamaica. It is not unusual in major infrastructure projects such as, the Second Cruise Pier Project for the Contractor to encounter situations which it believes gives rise to an entitlement to claim for additional works. Similarly, it is standard practice for the consultant Project Managers to review any claims made and to advise the Employer of the validity, if any, of said claims. Furthermore, the Project Managers have not yet advised SCASPA that the Contract sum will increase based on the claims made by the Contractor.

The relationship between the Contractor (CCC) and the Employer (SCASPA) continues to be professional and productive and this is evidenced by the Contractor’s recent confirmation that the Second Cruise Ship Pier Project is scheduled to be completed and handed over in September 2019. At no time has the Contractor advised the Employer that it intended to suspend the works.

The Public should be aware that as the Project progresses many local construction tradesmen continue to benefit from the works being undertaken to construct the Second Cruise Pier Project. Similarly, several local Contractors, Sub-Contractors and Suppliers are also benefiting from the construction involved in building this major piece of tourism infrastructure.

The Public can be assured that SCASPA will continue to provide updates on the Second Cruise Pier Project leading up to its completion in September 2019.