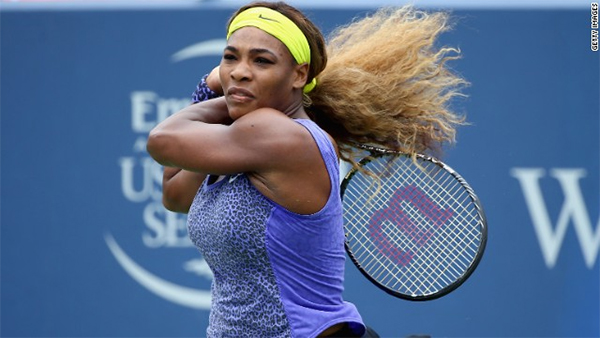 Serena on a roll

(CNN) — For the serious contenders at grand slams, it’s all about trying to advance with minimal fuss in the first week. That way they have plenty of energy left for when the competition picks up in the second week.

Serena Williams certainly isn’t messing around in the early stages of this year’s U.S. Open.

After crushing Taylor Townsend — a potentially tricky opponent — in the first round in 55 minutes, Williams routed another fellow American, Vania King, 6-1 6-0 in 56 minutes Thursday to reach the third round.

This grand slam is big for Williams.

Even though she has won 17 majors, none have come in 2014 and she didn’t progress to the quarterfinals at the Australian Open, French Open and Wimbledon.

But New York could once again bring Williams joy — she is the two-time defending champion.

The top seed’s only problems against King came in her first service game, when Williams hit three double faults in windy conditions.

Williams’ path to the final got a little easier when Ana Ivanovic was upset by big-serving Czech Karolina Pliskova 7-5 6-4 and Samantha Stosur — who defeated Williams in the 2011 final — blew match points and lost to Estonia’s Kaia Kanepi in a third-set tiebreak.

Ivanovic and Stosur were in Williams’ quarter.