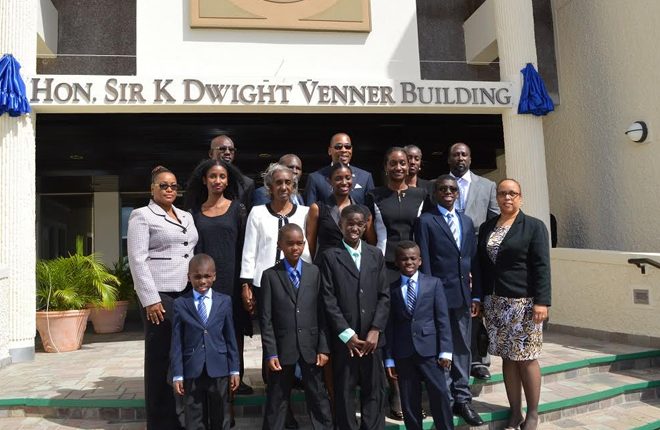 Sir K. Dwight Venner immortalized in the history of ECCB with naming of building in his honour

(SKNIS): The Eastern Caribbean Central Bank (ECCB) Phase I Building was officially named today, March 02, in honour of the life and legacy of the longest standing governor of the institution, Sir K. Dwight Venner, who now has become immortalized in the history of the ECCB.

At the momentous ceremony, Prime Minister of Antigua and Barbuda and Chairman of the ECCB Monetary Council, Honourable Gaston Browne, said that he was very pleased to be at the event to mark the legacy of the late Sir K. Dwight Venner.

“We all regret that he is not alive to receive this honour, but we could be comforted that the initiative to bestow this honour was taken while he was alive,” said Honourable Gaston Browne. “So, he had full knowledge of it to the extent that he was able to determine the participants in today’s ceremony.”

Prime Minister of St. Kitts and Nevis and member of the ECCB Monetary Council, Dr. the Honourable Timothy Harris, said that the naming of the building in Sir Dwight’s honour is a fitting tribute to his sterling service in light of the fact that the building was the first to be erected under his governorship.

“The visionary nature of the man [was] shown from his early tenure at the bank when it was recognised that the bank had outgrown the space that was provided for its use to the point where the officers were located in several buildings across beautiful Basseterre,” said Prime Minister Harris. The successful completion of the Phase I building, which was officially opened in October 1994, five years after Sir Dwight assumed the governorship, then brought all departments of the bank under a single roof on one compound.”

He said that this venture improved the overall efficiency, productivity and security of the bank.

Prime Minister Harris said that citizens of St. Kitts and Nevis as well as the people of the Eastern Caribbean Currency Union (ECCU) are deeply saddened by the loss of Sir Dwight.

“Sir Dwight was a giant leader whose footprint has left an indelible mark on the economic and financial landscape of each of the eight countries making up our Currency Union,” said the prime minister. “We thank him for his outstanding service to all of our people and I am honoured and humbled to be a part of this ceremony, which gives recognition in a meaningful way to the service that the late Sir Dwight had given to the people of the region. May his legacy live on and in the naming of the building in his honour we can be reminded of all that he stood for.

The Honourable Sir Dwight passed away on Thursday, 22 December, 2016 at the age of 70. He is survived by his wife Lady Lynda Arnolde Winville Venner nee St. Rose and their seven children.