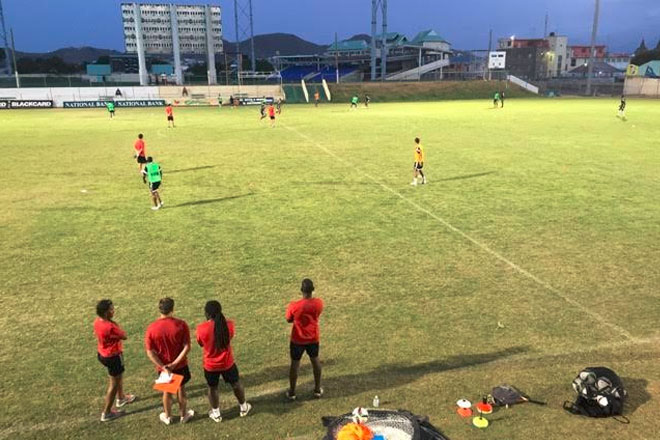 Basseterre, St. Kitts — The head coach of the St. Kitts-Nevis National Football Team said the team is in its best condition to engage the El Salvador team in the World Cup qualifier match to take place at Warner Park two days from now.

Speaking to the media last night just after a four-hour practice session, Head Coach Jacques Passy said, “I feel very good about the team. I feel excellent. I have seen them train for 10 days in a row now. The team is mentally very tough. The training sessions have been top level. It’s a great group.”

While that is the case, he cautioned against over exuberance, because he expects the matchup to be tough.

“We are facing a top team in CONCACAF. It doesn’t mean everything we have done creates an automatically a win, because we are facing a team that has a lot of experience. But what I can tell you is that the team is at its highest of its potential currently, after ten days of training.” Passy said.

As to what the team will be focusing on for the next few days, Passy pointed to the fine-tuning of the team’s play. He said, “The majority of the tactics are now over. We are just now looking at different specific scenarios, different specific, situations – when should we pressure, when should we not pressure. We are looking at specific aspects of the game. The high intensity part of the physical training is over.”

Tickets are on sale for Thursday’s 8 p.m. match at Football House on Lozack Road. By Wednesday ticket sales will be transferred to Warner Park ticket booths. Patron on Thursday night can expect a festive atmosphere and some pre-match entertainment as well.

This top qualifier match will be transmitted live to a global audience, which gives St. Kitts and Nevis “tremendous exposure”, an SKNFA official said.