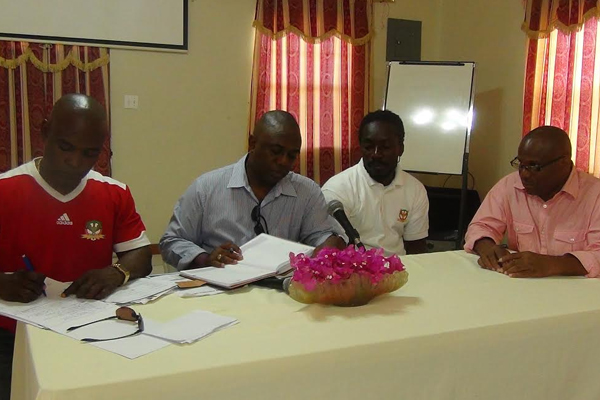 The press briefing which centered on the issue of the upcoming CFU Caribbean Cup Football tournament to be played at the Warner Park Football stadium in St. Kitts, commencing this coming Wednesday 3rd September, was ably chaired by Mr. Val Henry of VH Communications Marketing Agency.

He welcomed the several media houses represented and thanked them for taking time from their busy schedule to be a part of the briefing.

Also at the head table were:

President Johnson also thanked the members of the media for being present and indicated that the CFU Caribbean Cup will commence in St. Kitts on Wednesday 3rd September and that matches will also be played on Friday 5th and conclude on Sunday 7th September with two matches per day.

The four participating teams are: St. Kitts and Nevis; Guyana; St. Lucia and Dominica. It is actually group six of the senior men’s tournament.

He was quick to point out that the St. Kitts and Nevis senior female team participated in finals of a similar CFU tournament in Trinidad and Tobago, recently.

He also noted that the St. Kitts-Nevis under 20 male team will soon participate in a similar CFU final in Trinidad and Tobago in a few weeks time.

Group six will see two teams emerging as the teams to go on to the next round, scheduled for Trinidad or Haiti, depending on placements of the teams.

Following that, there will be the grand finals in Jamaica in November.

He stated that he is hoping that the St. Kitts-Nevis team will not only make the finals but will qualify as one of the top four teams in the finals in Jamaica and thus qualify for the Gold cup in the USA in 2015.

The full schedule of the matches is as follows:

Arrangements have been made for the MV Caribe Queen to make special runs on match nights and will return one half hour after the game, especially for the fans in Nevis.

There is a special incentive in the offing: Group purchases of at least 20 tickets, will cost $5.00 less per ticket. However, such tickets must be purchased in advance of the night of the game.

He assured the general public that security at the gate will be ‘extremely tight.’ His Association has met with the high command of the Royal St. Christopher and Nevis Police force in this regard and received the assurance that certain measures will be put in place to ensure the safety of players, officials and fans alike.

He further noted that Football is a popular sport on Nevis and he is also expecting the significant Guyanese population on the island to come out and support their team.

Mr. Dexter Tyrell added his words of encouragement to the Nevisian public to be a part of the tournament. He had special words for the corporate bodies on Nevis. He urged them to come on board in terms of advertisement as it would be a great opportunity to boost their sales.
He noted that the hosting of the prestigious tournament will cost upward of $250,000.00.

Coach Jeffrey Hazel indicated that the team has been in training for over two months now in terms of the locally based players.
However, they are being joined by a list of elite overseas based players such as:
Tishan Hanley; Gerard Williams, Gelawney Archibald, Givon Elliot, Kennedy Isles and
Atiba Harris

Additionally, four players who are established in the English leagues, will also be in the makeup. They are:
Romaine Sawyers-Wolsol Football club first division
Jason St. Juste
Chesfer Robinson
Zephaniah Thomas

The twenty man squad was set to be announced that same Saturday night.

He is confident that the local team’s chances are good and intends to top the group.

In response to a question, he indicated that three players from Nevis were selected to the original training squad. (It is understood that these included Aljay Newton and Jurnel PAS Turner who both had some difficulties in practicing with the team.)

He noted that it was the intention for the team to conduct a training camp in Nevis on Saturday 30th August, but the ET Willet Park was unavailable. Added to that, the Department of Youth and Sports was hosting an activity on the same day.
The members of the Press then had the opportunity to field their questions and appropriate responses were received from the gentlemen at the head table.
These questions included issues surrounding officials from Nevis and distribution of funds received by the SKNFA, between the two islands.

President Johnson in his response was careful to acknowledge the significant contributions of present and past officials from Nevis and noted among others that the Manager of under 20 team that recently went to Trinidad, was Jamir Claxton.
He also recognized the contributions of Malcolm Ramsey who is a qualified FIFA Referees’ Assessor.
He also indicated that whenever there were training and other opportunities, Nevis was always included and will always be included in any effort to develop the game in the Federation.

All of the gentlemen at the head table used the opportunity to once again encourage the people living on Nevis, to show up at the Warner Park stadium in large numbers to support the local team and at the same time witness some exciting Football.