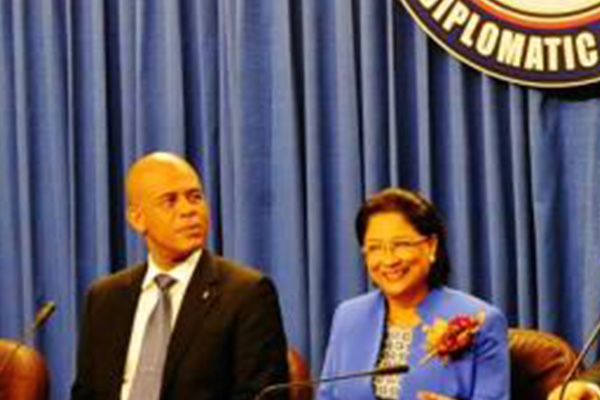 Port Of Spain, Trinidad — A civil society group in Trinidad and Tobago has described as “social genocide” the recent court ruling in the Dominican Republic, which has left over 200,000 Dominicans of Haitian descent potentially stateless.

In a message to the Caribbean Community (CARICOM) Bureau, a civil society delegation comprising Sunity Maharaj of Jouvey Ayiti, Asha Cambon of Groundation Grenada, Mike James of the Caribbean Episcopal Conference, ambassador Reginald Dumas, and University of the West Indies Professor Norman Girvan, who led the group, said: “Members of the Bureau: we cannot countenance, without the most vigorous opposition, the further institution of a state of social genocide and apartheid in the heart of our own region.”

“We cannot let down our brothers and sisters in the Dominican Republic, integral members of the regional family. The Caribbean Community has an historic opportunity to demonstrate its relevance to, and its caring for, the citizens of our region. We are sure you will not let them down,” the group added in a statement to CARICOM heads.

The group presented two petitions to the CARICOM heads protesting the ruling of the Dominican Republic constitutional court, which denationalizes citizens of Haitian descent, and called on CARICOM to take strong action to denounce it and bring pressure on Dominican Republic to change it.

In discussion with the CARICOM heads, the group stressed that the focal point of this unprecedented outcome from a court ruling is the human rights aspect.

“We would wish to emphasize that the people who have been denationalized by the ruling are not Haitians; nor are they illegal migrants. They are Dominican born, many of whom have up to now enjoyed Dominican citizenship. This is not a migration issue; it is a human rights issue,” the group said.

The group also proposes “that CARICOM (i) provide continued support within the OAS for the in loco visit by the IACHR (ii) request an advisory opinion from the Inter-American Court of Human Rights; and (iii) consider the introduction of a resolution of condemnation within the UN General Assembly.”

In response to the first stated proposal, Persad-Bissessar said, “CARICOM is looking forward to the outcome of the visit of the inter-American Commission on Human Rights to the Dominican Republic in early December.”

Persad-Bissessar said that Trinidad and Tobago would continue to work with the Dominican Republic and other partners in the region and at a wider international level towards a swift resolution of this matter.

With those words, Martelly and Gonsalves could be seen at the head table reaching out and gripping each other’s hands in camaraderie.

Beyond that, Gonsalves explained that the outcome of the ruling is existential and touches the rest of the region, especially as it is not persons of Haitian descent alone that are affected, but persons from other Caribbean islands and beyond who are born in the Dominican Republic are also impacted.

In its statement to the CARICOM Bureau, the civil delegation group said the Dominican Republic ruling cannot escape international scrutiny in the face of the country being party to several treaties.

“Moreover, the sovereignty of the Dominican state cannot be legitimately invoked to shield the ruling from international scrutiny. The ruling violates provisions of international law that prohibit the arbitrary deprivation of nationality; racial non-discrimination; and statelessness. It contravenes a binding ruling by the IACHR in 2005 in the case of Yean y Bosico. Indeed the 2010 Constitution of the Dominican Republic clearly states in Article 74.3 that Human Rights Treaties and Conventions have the same status as the Constitution; while Article 110 prohibits the retroactive application of laws that have an adverse effect,” the statement said.

That amounted to a violation of their rights to nationality and the equal protection under articles 20 and 24 of the Inter-American Convention on Rights of the Child. The court also noted that article 18 on the rights of the child had been violated as they were not recognized by the country they lived in and could not receive social assistance.

What the ruling by the IACHR showed is that every child born in the Dominican Republic has rights that are protected under human rights treaties and conventions that the country has signed on to, as stated in Article 74.3 in its 2010 Constitution.

“The impact of the ruling goes far beyond the courtroom, however. It renders an already marginalised section of the Dominican population even more vulnerable to acts of daily discrimination and abuse based on the colour of their skin and/or the sound of their names. Already there are reports of people being denied public transport; of being taken off buses and arbitrarily deported,” the civil group said.

Of major concern is the over 700 Haitians already repatriated to Haiti following the September 23 ruling and the violence in the Dominican Republic against persons of Haitians descent.

The group said: “Given the atmosphere of racial xenophobia that now exists in the Dominican Republic, there is a real risk of further degeneration into violence, with potentially tragic consequences.”

Persad-Bissessar said there was a loophole in the Dominican Republic constitution that made it possible for the court to hand down such a ruling.

“The Dominican constitution up to 2010 recognised that everyone born in thrDominican Republic are citizens of DR but a loophole allowed for the authorities to deny the children of undocumented persons of such citizenship, they were judged to be in transit… this exclusion was meant only for tourist and diplomats but was extended to undocumented persons of Haitian descent, despite the fact that many parents have been in the country for years – rather than the ten days that is specified in other parts of the constitution as being the timeframe within which to be in transit.”

The CARICOM chair said CARICOM does not support the conditions that Dominicans of Haitian descent have been exposed to.

“CARICOM is opposed to the conditions of Dominicans of Haitian descent who have significantly contributed to the progress of the Dominican Republic through their labour, their sacrifices and today they are being treated as transitory in transit visitors. Those who are affected are denied their basic human rights including freedom of movement, access to education and to health care, amongst other basic rights,” she said.

The civil delegation group expressed its belief and confidence in CARICOM to secure a reversal of this ruling and implored the regional bloc to use its ability to prevent a potential catastrophe in the Dominican Republic.

“We believe that CARICOM countries have the ability to help prevent a humanitarian catastrophe and influence the course of events by throwing their collective weight behind the effort to stay the application of this ruling, obtain its reversal and reinstate the basic human rights of the denationalized persons.”