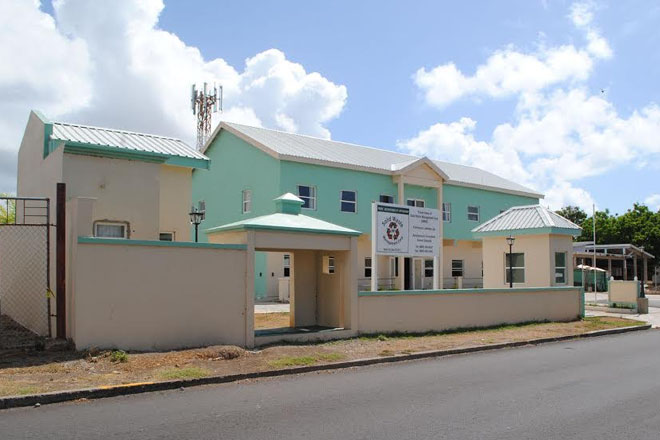 Basseterre, St. Kitts — After serving the public from a rented and outgrown location in Basseterre’s Central District for a decade and a half, the Solid Waste Management Corporation SWMC (St. Kitts) is preparing to move into its own spacious state-of-the-art building in Taylor’s Range.

The relocation, which is envisaged to be in a matter of days, will mark the abrupt termination of hassles the staff and clients of the Solid Waste Management Corporation would have endured while operating out of the rented property, which did not offer ample parking for the staff let alone clients coming to do business with the corporation.

According to Solid Waste Management Corporation’s General Manager, Mr Alphonso Bridgewater, the long wait the staff has endured will increase returns on investment by way of additional benefits the new 7,000 sq. feet two-storey building will offer, including a modern conference centre.

The new building is a centrepiece of contemporary technology. Mr Bridgewater observed that before planning stages were completed, they invited the National Emergency Management Agency (NEMA), and personnel from the Fire and Rescue Services to give recommendations to the corporation.

A standby generator that would kick-in should there be a power failure, has been provided and there will be back-up storage water tanks in the roof that will ensure that activities in the building do not grind down to a halt should there be an interruption in the water supply.

Construction of the building, whose close neighbours include the Embassy of the Republic of China on Taiwan, started in mid-2013. Design Consultant, Ms Arlene Edwards of Williams Architectural, advised that the building should have been completed much earlier were it not for change of building plans.

She observed that the building had to be extended midstream, as originally it was supposed to be bungalow style but SWMC realised that they would need some additional space. This resulted in the addition of an upper floor.

According to the Design Consultant, the building’s lower floor has private offices for Accounts Officers, room for proper filing systems, spacious lobby, a small conference room, and a kitchen.

There is a guard station at the entrance of the compound for improved security, while the compound has parking spaces for staff and visitors as well as for the differently-abled.

“They have central air-conditioning,” stated Ms Edwards. “In terms of going green, the majority of the lighting is LED, and they also plan to go solar in the near future as well. The A/C is controlled by a sensor, so the more people you have in the building the A/C will automatically adjust upwards, the less people you have, it adjusts downwards as well. So in terms of energy saving, it should be a very good system.”

The upper floor has the conference centre that is 1,050 sq. feet and one that could host between 60 and maximum 100 persons depending on furniture arrangement. In the future if SWMC wants to divide the room into two, they could do that for small meetings.

“The conference room facility also has two lounges, or what we call break-out room areas and these could be used for smaller, more private meetings for persons, who perhaps do not require a formal and/or larger setting,” said Ms Edwards.

According to the General Manager, Mr Alphonso Bridgewater, the conference centre will not just be for academic type meetings or when they have speeches, but it will be catering for weddings and all sorts of receptions. It comes with kitchen facilities which patrons could use to warm and serve food.

“Once you hire the conference room it comes with all sorts of things,” explained Mr Bridgewater. “You get drop down monitors, you do not have to set up the room as we will provide you with table cloths if that is what you need, unless you want something special and you bring it on your own. The centre has phone, fax, and secretarial space.”

In this digital age, the new Solid Waste Management Corporation building is up to speed. According to IT Specialist, Mr Chaze Taylor, the building has a convergence room which is the master room controlling the entire system, where all the IT and electronics, fire, security, data, and telephone converge.

“The Conference Centre will be fully WI-FI,” explained Mr Taylor. “All the users will have access to the internet through WI-FI. The WI-FI there is a broad band to make it faster. Downloads and uploads will be of good speeds, and more users will be able to access it.”

“And also very important is the fact that the Solid Waste actually went above and beyond, because, in terms of codes for St. Kitts, when you are putting in an elevator, it is only from the fourth floor up,” pointed out Ms Edwards. “But Solid Waste has two floors and they have gone ahead and put in an elevator, specifically to accommodate differently-abled persons.

“Differently-abled persons in the community have been asking for this type of facility for a while to accommodate them, so I think it is good Solid Waste has gone ahead and done this.”