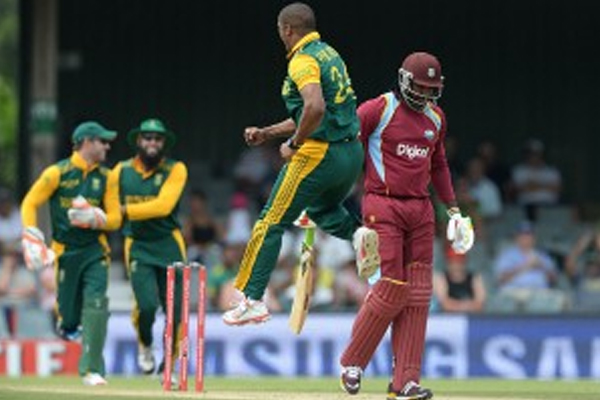 Sports Page — With every day they remain in South Africa, West Indies’ chances of pulling together a respectable World Cup challenge falters before our eyes. They made only 122 at Buffalo Park in the third ODI, a spiritless and, at times, irresponsible display full of ghastly, ill-judged shots and glum expressions. A nine-wicket defeat later revealed itself much as expected.

Three days earlier, the crowd in Johannesburg had feasted on an AB de Villiers world record; in what was only Buffalo Park’s third ODI in nine years, the townsfolk of East London had to suffer a mismatch, concluded in spots of drizzle. Truly, the big cities get all the fun.

East London took their pleasure in Hashim Amla and Faf du Plessis, lording it over the West Indies attack for unbeaten half centuries as the match was wrapped up with more than 41 overs unused, not so long after some had come in from work.

At 2-0 down in the series with three matches remaining, West Indies needed to win to keep the series alive, but Buffalo Park’s slow, low surface demanded discipline – a challenge far removed from the joyous batting surface at the Wanderers on which de Villiers had struck the fastest ODI hundred in history – and West Indies did not show enough of it.