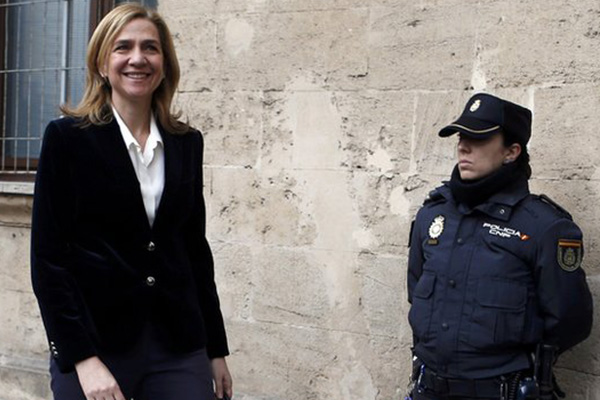 (BBC) — Spain’s Princess Cristina is being questioned in court in connection with a corruption scandal involving her husband’s business dealings.

It is the first time in history that a member of Spain’s royal family has appeared in court as the subject of a criminal investigation.

Her husband Inaki Urdangarin is alleged to have defrauded regional governments of millions of euros of public money.

The princess and her husband deny any wrongdoing, and have not been charged.

The BBC’s Tom Burridge in Madrid says the world’s media will analyse every detail of this corruption case, which has already gone on for three years and made headlines in Spain on an almost daily basis.

Spain’s royal household admits the case has damaged the reputation and credibility of Spain’s royals, and, partly because of this scandal, the popularity of King Juan Carlos has fallen in recent years.

Pro-republican campaigners vowed to demonstrate near the court.

Princess Cristina, 48, stepped from her car and walked into the court on the island of Mallorca without commenting to the waiting television crews.

King Juan Carlos’s youngest daughter will have to answer dozens of questions from a judge in a closed-door hearing.

The judge has named her as a fraud and money-laundering suspect.

The allegations relate to a supposedly not-for-profit organisation called Noos, of which Inaki Urdangarin was president.

The foundation staged a series of sporting events for the regional governments of the Balearic Islands and Valencia.

Mr Urdangarin is accused of organising the events at hugely inflated prices.

Princess Cristina is suspected of spending some of that money on personal expenses.

There are also questions about what Princess Cristina knew about the alleged wrongdoing of her husband. Her lawyer has said she is innocent.