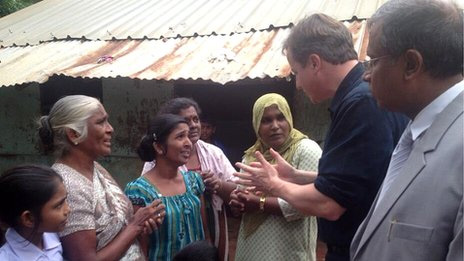 (BBC) David Cameron has said his symbolic visit to the north of Sri Lanka has “drawn attention to the plight” of the Tamil minority in the country.

The Tamils’ treatment at the end of the country’s civil war dominated the run-up to the Commonwealth summit, which opened in the capital Colombo earlier.

The UK prime minister has defied calls for him to boycott the event in protest against alleged human rights abuses.

He urged the authorities to show “generosity” to all Sri Lankans.

Mr Cameron has insisted there should be a proper investigation into alleged Sri Lankan war crimes in the final months of the conflict which ended in 2009, saying a process of “truth-telling” was essential for reconciliation.

In a historic move, Mr Cameron travelled to the Tamil-dominated north of the country – the first international leader to do so since Sri Lankan independence in 1948.