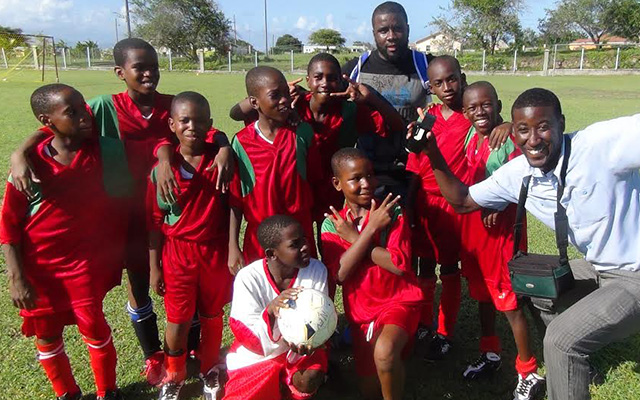 The St. James’ Primary School, under Coach Jamal Hamilton has made a historic entrance into the finals of the 2014 edition of the Giant Malt Primary School Football championship.

This feat was accomplished on Monday 10th November when they defeated the Ivor Walters’ B team at the Bath Village playing field.

The scores were tied at the end of regular time with a 1-all score line and remained the same after completing the ten minutes of extra time allowed by Referee Malcolm Ramsey, who is a FIFA Referees’ Assessor.

The two teams then went to the penalty spot and there is where the St. James’ team made the difference. They put in 3 of their 5 attempts, while the Ivor Walters team could only manage 1 conversion.

The goal scorers in regular time were: Tyri Jeffers for St. James’ Primary and Dakari Browne for the IWPS.

The second semi final encounter for the B division was equally exciting. This was between the VOJN Primary and the St. Thomas’ Primary teams.

Both teams went to the penalty spot and the St. Thomas’ team made all of four conversions while the VOJN Primary could only manage one.

The goal scorers in regular time were: Shaeen Roberts for the VOJN team and Al Newton for the St. Thomas’ team.

It means therefore that St. Thomas’ Primary will face off with St. James’ Primary in the grand B division finals set for Thursday 13th November at the ET Willet Park.

Both coaches—Eddy Caines for the St. Thomas’ Primary and Jamal Hamilton are confident of victory.

Meanwhile, on that same day, The Ivor Walters Primary A team trounced their opposite number from the St. Thomas’ Primary school with a score line of 5 goals to 1.

The ultimate hero was Damari Mitchelle who knocked in a hat trick and was really impressive with at least two solo runs.

The other goal scorer was the very skilful Jaheem Bartlette with his two strikes.

The other A division semi final encounter will be played today Tuesday 11th November at the ET Willet Park when the Maude Cross Preparatory team will engage neighbours Charlestown Primary. One of the coaches of the CPS team, Ziggy Newton is already predicting a 5 to nil drubbing by his team, but of course the Prep boys will have other ideas.

The finals in both divisions will be played on Thursday 13th November at the ET Willet Park.