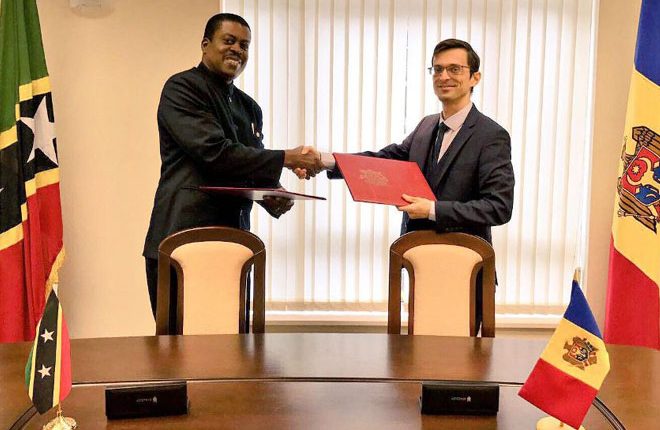 London, England – At a ceremony on September 08 in London at the Embassy of Moldova; St. Kitts and Nevis and the Republic of Moldova officially signed a joint communique establishing diplomatic relations.

The signing ceremony, formalising diplomatic ties between the two countries, marks a noteworthy milestone for the Federation, consistent with the commitment of Foreign Minister Brantley and the Unity Government to deepen and broaden its network of global partners and friendships to promote greater opportunities for all Kittitians and Nevisians to expand their own networks of relationships around the world.

The Embassy of Moldova’s Chargé d’Affaires, Mr Vilen Murzac praised the initiative of the Federation in establishing diplomatic relations as an important first step. He also expressed Moldova’s willingness to explore ways in which the two countries can cooperate in the future at the bilateral and multilateral levels.

High Commissioner Isaac, took the opportunity to brief the Chargé d’Affaires on developments in St. Kitts and Nevis following the passage of hurricane Irma as well as on the progress being made by St. Kitts and Nevis in the services sector and the broader economy. The two envoys discussed Moldova’s rich cultural history and opportunities for future cooperation between the two countries.
Dr Isaac, while also acknowledging that this is an important first step, commended Moldova’s willingness to leverage this new partnership to promote cooperation and future exchanges.