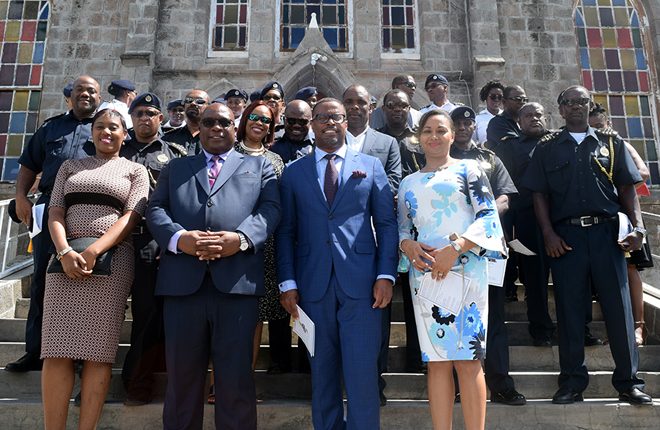 The St. Kitts and Nevis Customs and Excise Department kicked off its celebratory activities in recognition of its 60th anniversary serving the federation with a thanksgiving service at the Charlestown Methodist Church in Nevis on Sunday, October 21, 2018.

The service forms part of a week of activities, which runs up to Sunday, October 28, 2018 under the theme, “60 years of Dedicated Service, Innovation and Advancement.”

The week will include an open day at picture square, Charlestown, Nevis and at the Customs Headquarters in St. Kitts from 10am (Friday, October 26); a gala dinner and awards ceremony at the St. Kitts Marriott Resort (Saturday, October 27), and community-based activities focused on donating to the St. Christopher Children’s Home and serving the elderly residents at the Flamboyant Home in Nevis and the Cardin home in St. Kitts.

While addressing the congregation, Prime Minister Harris expressed his profound gratitude to the employees of the agency whose professional approach to their responsibilities has led to an increase in the collection totals so far this year when compared to the same period in 2017.

Joining the regular worshipers of the church were Prime Minister and Minister of Finance, Dr. the Honourable Timothy Harris; Premier of Nevis, the Honourable Mark Brantley and Mrs. Brantley; deputy Speaker of the National Assembly, the Honourable Akilah Byron- Nisbett; financial secretary of the federal government, Mrs. Hilary Hazel; acting comptroller of Her Majesty’s Customs and Excise Department, Mr. Kennedy Desilva, as well as current and past officers of the customs department.