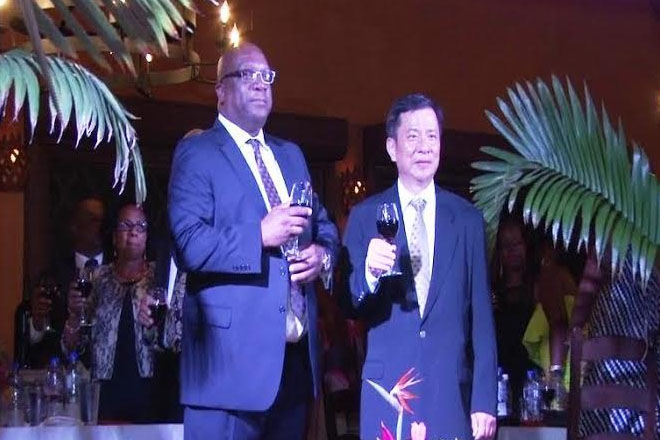 Basseterre, St. Kitts (SKNIS) — Top government officials in St. Kitts and Nevis joined diplomatic staff from the Embassy of the Republic of China (Taiwan) in celebration of that country’s 104th National Day at the Palms Court on Friday, October 9th.

Prime Minister Dr. the Honourable Timothy Harris said that St. Kitts and Nevis and Taiwan have endured a great relationship since gaining diplomatic ties and pointed out that both countries have a lot in common.

“Taiwan, though far away from St. Kitts and Nevis, different as it is in ethnicity and in other areas of development including geography, share much in common,” said Dr. Harris, adding that the common bond between the population of the diplomatic allies has been the beliefs in the value of freedom, democracy and stability.

“Taiwan embarked upon a pathway of democracy, the democracy which we in St. Kitts & Nevis have always fought for and a democracy that they have adopted as their pathway to securing freedom, to securing freedom of the economic actors in Taiwan, and freedom of its people and as its pathway to peace,” said Dr. Harris. “They have been able like we have been able to bring peaceful transition at the governmental level since the 1990’s until now.”

Prime Minister Harris commended Taiwan for its commitment to democracy and noted that as St. Kitts and Nevis celebrates its own democracy as it should everyday; we are heartened that this is one of the enduring values that join us in celebration with the good people of Taiwan.

His Excellency George Gow Wei Chiou, Taiwan’s Resident Ambassador to St. Kitts and Nevis, described the celebration as one of importance.

“Today has another special meaning to us,” he said, noting that it is the 32nd Anniversary of the establishment of diplomatic ties between the Federation of St. Kitts and Nevis and the Republic of China (Taiwan). He credited His Excellency Dr the. Right Honourable Sir Kennedy Simmonds with the vision of forging diplomatic relationship.

“Without your firm and resolute decision in 1983, Taiwan could not have been the first country to establish diplomatic ties with St. Kitts and Nevis,” he said. “Because of your wise and farsighted determination, we can stand here to celebrate 32 years of diplomatic relations with you.”

The relationship has been marked by a number of successful cooperative projects between Taiwan and St. Kitts and Nevis. They range from assistance in agriculture to social development, from education to recreation, from health to information technology, as well as renewable energy, sports and tourism.

His Excellency Chiou said the purposes of all these cooperative projects are to enhance human resources empowerment, and to increase the welfare of Kittitians and Nevisians.

Prime Minister Harris expressed appreciation to the Government and People of Taiwan for a long progressive relationship between the two countries.