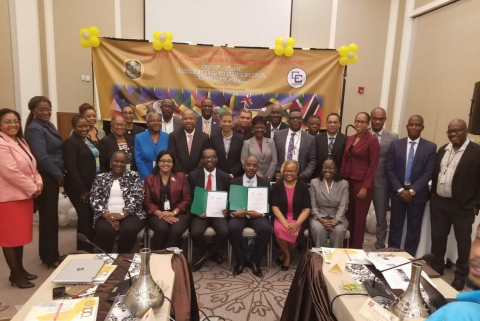 GEORGETOWN, Guyana: July 16-17 2019 – A delegation from the St Christopher and Nevis Social Security Board including the Chairman of the Board, Mr Oscar Walters, Former Director Acting, Mr Elvin Bailey and newly appointed Director Mr Antonio Maynard participated in the 30th staging of the CARICOM Heads of Social Security meeting held last week in the Republic of Guyana.

This annual congregation of Social Security officials brings to focus the current and future working operations of these pension fund organisations, advancements and new practices for achieving defined goals, projections related to demographics and the economy and actions that are essential to the effective management these social protection funds.

The two day meeting, was addressed for the first time by CARICOM Secretary General Ambassador, Irvin LaRoque who applauded the practitioners for the efforts in stablising households and economies who are dependant on functional Social Security organisations such as ours. He highlighted however, challenges as it relates to the growth of the informal sector, drastic increase in Non-Communicable Diseases and growing complexities of the migrant community across the region.

During the plenary sessions which was co-chaired by Mr Bailey, a number of key issues were raised including the Reform Agenda which aims to strengthen social security funds as demographics change, the CARICOM Reciprocal Agreement and innovations in reaching the self employed to ensure flexibility with regards to payment options.

At the end of the meeting, each social security organisation is responsible to ensure specific tasks are completed before the upcoming meeting in 2020. St Kitts Nevis Social Security hosted the meeting in 2018 as part of its 40th Anniversary celebration.