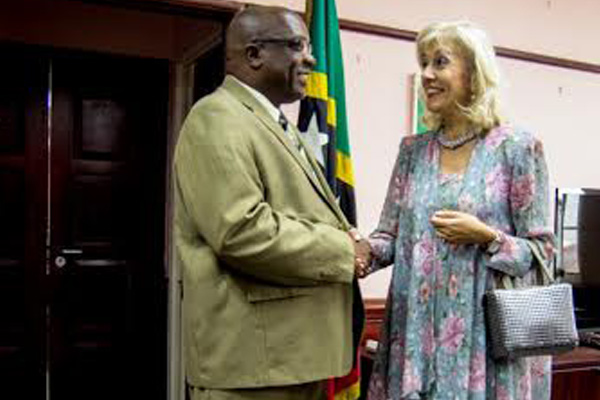 While in the Federation, Her Excellency Leon-Pernet paid a courtesy call on Prime Minister of St. Kitts and Nevis, Dr. the Honourable Timothy Harris and Permanent Secretary in the Ministry of Foreign Affairs, Mr. Elvis Newton.

The Swiss Government has encouraged the Government of St. Kitts and Nevis to establish a Permanent Mission in Switzerland. Geneva currently ranks second after New York for being the most important UN city and hosts a large number of NGOs and offices for many UN programmes and funds in which the Federation participates. These include: United Nations Conference on trade Development (UNCTAD), International Trade Centre (ITC), International Labour Organization (ILO), World Health Organization (WHO), Joint United Nations Programme on HIV/AIDS (UNAIDS) and World Intellectual Property Organization (WIPO).

In 2005, St. Kitts and Nevis established a Mission to the World Trade Organization (WTO) in Geneva; however, this has since been upgraded to a regional entity – Permanent Delegation of the Organization of the Eastern Caribbean States (OECS) to the United Nations.

St. Kitts and Nevis and Switzerland established diplomatic relations on November 17, 1992. Both countries have maintained good bilateral relations over the past 20 years and have benefited though mutual cooperation programs. Cooperation programs include the establishment of the honorary consulates and the agreement on double taxation.