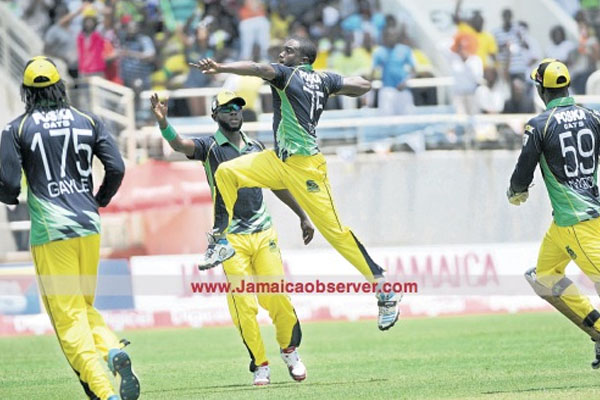 Taylor, who snatched the Man-of-the-Match award, took 2-11 off four overs as the Tridents were restricted to 128-6, in search of the 148 runs for the win.

Batsman Shoaib Malik provided some hope for the Tridents in blasting 81 not out from 43 balls, but the Tallawahs bowlers generally executed well on a sluggish batting pitch.

The Tallawahs have 12 points with six wins and a loss, and only trail the Trinidad & Tobago Red Steel due to an inferior net run-rate. The Tridents remain fourth with eight points.

The Tridents captain Kieron Pollard said his team’s slow start was a major factor in the loss.

“We had so many dot balls especially in the first 10 overs and that set us back a bit. Restricting them to 147 was always gettable on this track. There were a couple positives out of this game [and] I think Shoaib Malik batted brilliantly,” he said in a post-match television interview.

Jamaica Tallawahs captain Chris Gayle said he was “very happy for the victory” and thanked fans for supporting the team over their three wins at home in the tournament.

Earlier, the Tridents won the toss and sent the Tallawahs to take first strike in sunny conditions.

Openers Chadwick Walton and the left-hander Gayle added 35 runs in five overs and three balls before the former was sent to the pavilion for 25.

Shah was promoted to the number three spot, and while he and Gayle struggled to consistently get the boundaries, they were able to stabilise the innings with a second wicket stand of 79 off 60 balls against a disciplined bowling effort from the Tridents.

Shah, who made a 36-ball 42, hit three fours and two sixes before he went after off-spinner Ashley Nurse and was caught on the midwicket boundary by Jeevan Mendis.

Russell (one) and Adam Voges (zero) followed in quick succession as the Tallawahs middle-order struggled for the second game in a row.

Gayle, whose timing was off due to the slow nature of the surface, tried to manoeuvre the ball into gaps for singles and twos.

In his mostly subdued knock he struck 39 off 38 deliveries before he was caught by Pollard at deep midwicket off the bowling of seamer Rayad Emrit when the Tallawahs were 123-5 in the 18th over.

David Bernard (five), Vettori (zero) and Theron (nine) all went in rapid succession as they desperately sought quick runs. Pacer Ravi Rampaul was the Tridents’ best bowler with a superb 4-18 off four overs.

Chasing 148 for the win, the Barbados franchise were pegged back at 27-3 in the seventh over.

Opener Dwayne Smith, the scorer of two centuries already this season, was dismissed for five when he played a cut shot to seamer David Bernard and was brilliantly caught by Jerome Taylor, lurking in a deep gully position.

Left-hander Jeevan Mendis (two) was clean bowled by Taylor, while wicketkeeper/batsman Shane Dowrich (nine) was caught by his opposite number Chadwick Walton off Bernard.

Thereafter, the Tridents continued to lose wickets, but Malik, the only player for the Barbados franchise to reach double figures in the match, kept them in sight with a breathtaking knock, laced with half a dozen sixes and five fours.

He was particularly harsh on seamer Juan ‘Rusty’ Theron, taking him for two fours and a six in the 11th over and plundering 19 runs in the 17th, including two sixes and a boundary.

However, Taylor bowled a remarkable 18th over, conceding a lone run and grabbing the wicket of Jason Holder (seven) to leave the Tridents in need of 38 off the final 12 deliveries.

Fast bowling all-rounder Andre Russell was accurate to Malik and gave up 10 runs, which meant the Tridents required 28 off the final over.

Taylor held his nerve, bowling high-paced deliveries at Malik’s toe to ensure the win. Taylor, off to a slow start in the 2014 CPL, took nine wickets in the three home matches and now has 11 in the tournament.

The Tallawahs move on to St Kitts where they will complete the remainder of the preliminary phase.