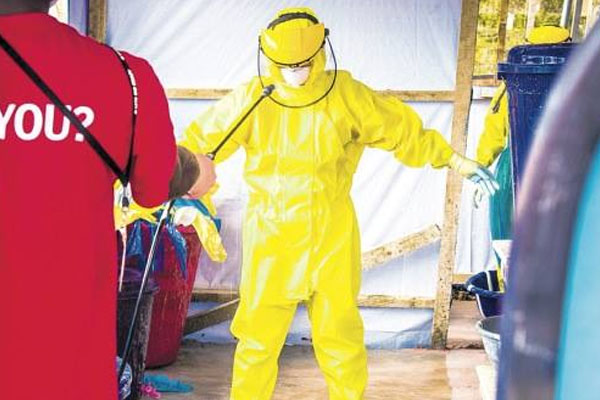 Threat to break Ebola isolation in Liberia over food

Monrovia, Liberia (AP) — Dozens of people quarantined for Ebola monitoring in western Liberia are threatening to break out of isolation because they have no food, the West African nation’s state radio reported Thursday.

Forty-three people were put in quarantine after four people died of Ebola in Jenewonda, a town in an impoverished corner of Grand Cape Mount County near the Sierra Leone border, the Liberia Broadcasting System said.

“WFP in Liberia heard about this community being isolated only two days ago via the radio and staff immediately began organizing a mission to bring food to the quarantined people,” said spokesman Alexis Masciarelli in an email to The Associated Press. “We are moving as fast as we can.”

There are no trucks in Grand Cape Mount County so food needs to be driven in from Monrovia, he said, adding they will verify reports with authorities and look into what is going on.

“We need to keep working with government and partners to identify the communities in need as quickly as possible,” he said.

Liberia is the hardest hit of three West African nations being ravaged by Ebola. The latest figures published Wednesday by the UN World Health Organization (WHO) show the country has at least 4,665 infected people and 2,705 have died there. WHO says there probably are more ill people and deaths but the numbers are under-reported. Overall, the WHO says the disease has killed 4,877 people and infected 9,936, almost all in Liberia, Guinea and Sierra Leone.

The fear of Ebola in Guinea has kept patients and health workers, including doctors, from a hospital that is serving as an Ebola centre in the capital, Conakry.