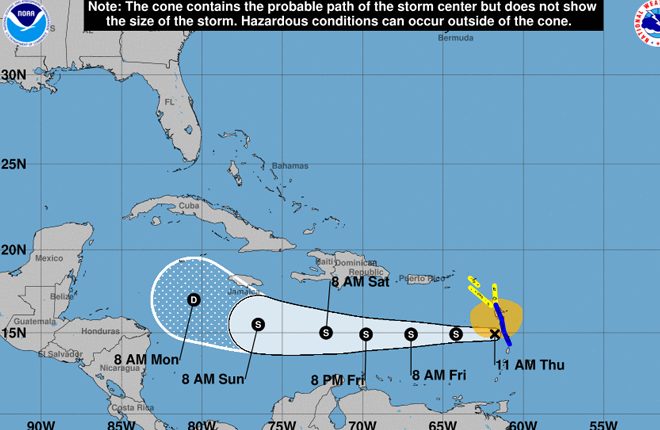 A tropical storm watch remains in effect for St. Kitts and Nevis.

On the forecast track, gusty conditions are expected throughout today.

A most recent update from the St. Kitts met office indicates that the center of Tropical Storm Isaac was located about 238 miles east- southeast of St Kitts and Nevis.

Isaac is moving faster toward the west near 21 mph (33 km/h). This general motion is forecast to continue today with a decrease in forward speed over the Caribbean Sea.

Data from a NOAA Hurricane Hunter Aircraft indicate that the maximum sustained winds are near 45mph with higher gusts. Little change in strength is expected over the next several hours as Isaac moves through the Leeward Islands, gradual weakening is forecast afterwards. Tropical-storm-force winds extend outward up to 160 miles to the north of the center.

Based upon the latest information, Tropical Storm Isaac is weakening and may even degenerate into an open trough tomorrow.

However the effects from this system will be felt over St. Kitts and Nevis during the course of today and the Tropical Storm watch remains in effect for our islands.

Wind gusts to 35 miles per hour are possible with the passage of Isaac. This means that small and loose objects must be secured.

Rainfall total of up to an inch is possible making navigation difficult and it is possible that flooding advisories may become necessary.

Seas will deteriorate with a combination of wind driven waves and swells peaking near 12 feet.

Small craft operators should stay in port and sea bathers should avoid the beaches until Isaac exits the area.