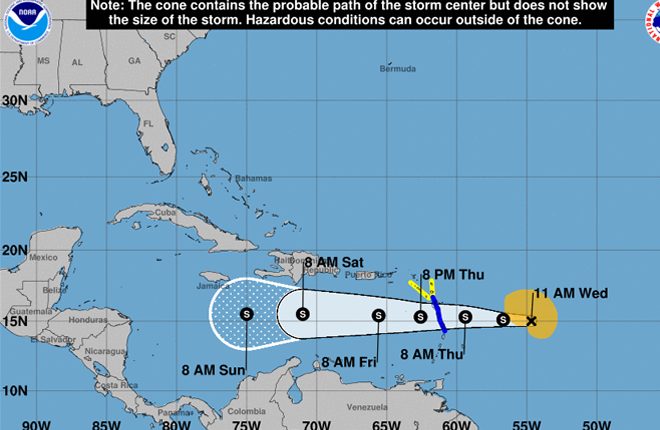 The most recent report from the St. Kitts Met Office indicates that the centre of tropical storm Isaac was located near latitude 14.5 North, longitude 53.5 West or about 610 miles east-southeast of St. Kitts and Nevis.

Isaac is moving toward the west at 15 miles per hour. This general motion is expected to continue through to the weekend.

Maximum sustained winds are decreased to 60 mph with higher gusts. Gradual weakening is forecast during the next few days. On the forecast track, Issac centre is forecast to move across the central Lesser Antilles and into the eastern Caribbean Sea on Thursday.

Tropical storm force winds extend up to 105 miles from the centre.

Based upon the latest position and analysis, tropical storm Isaac is a little weaker.

Rainfall amounts of up to an inch are possible with the passage of Isaac. Warnings for mariners and sea bathers will be issued today Wednesday, September 12.

All residents should continue to monitor the passage of Isaac.