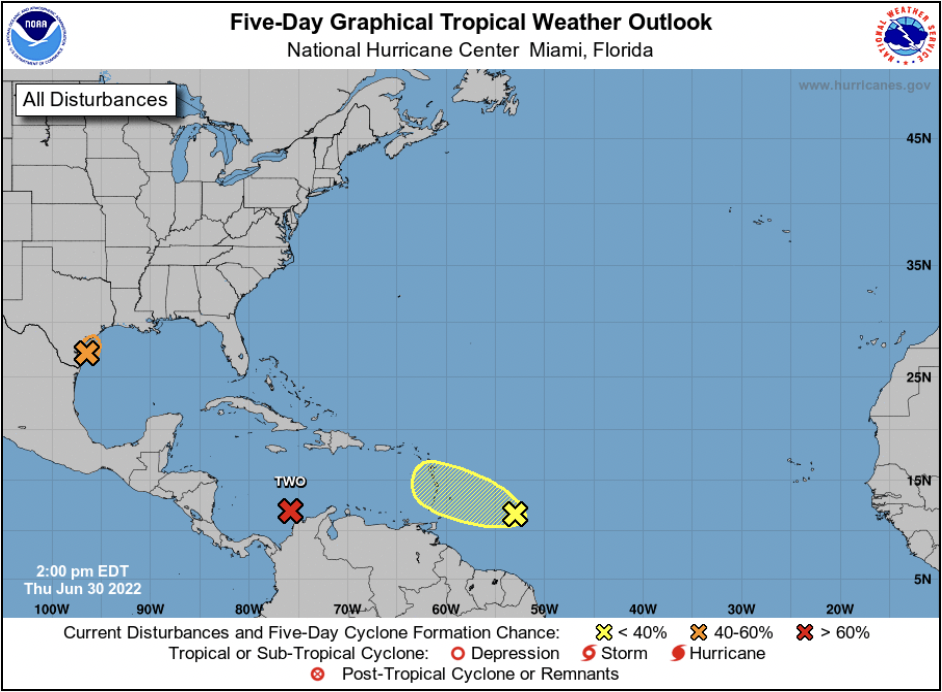 For the North Atlantic…The Caribbean Sea and the Gulf of Mexico:

Active Systems:
The National Hurricane Center is issuing advisories on Potential Tropical Cyclone Two, which is located over the southwestern Caribbean Sea.

Recent satellite and radar imagery indicate that showers and thunderstorms associated with an area of low pressure near the southern coast of Texas have changed little in organization since this morning. The disturbance is forecast to move slowly northward and inland over southeastern Texas later today. Slow development of this system is possible while the low remains over water and it could still become a short-lived tropical depression before it moves inland. Regardless of development, heavy rain is possible along portions of the Texas coast for the next two days. For more information about the potential for heavy rain, please see products issued by your National Weather Service office. An Air Force Reserve Hurricane Hunter plane is currently enroute to investigate the system.

Western Tropical Atlantic:
A tropical wave located several hundred miles east of the Windward Islands is producing disorganized showers and thunderstorms. Any development of this system should be slow to occur while the wave moves west-northwestward during the next day or two. The wave is forecast to move over the Windward Islands on Friday and then over the eastern Caribbean Sea by the weekend, where further development is unlikely due to unfavourable environmental conditions.