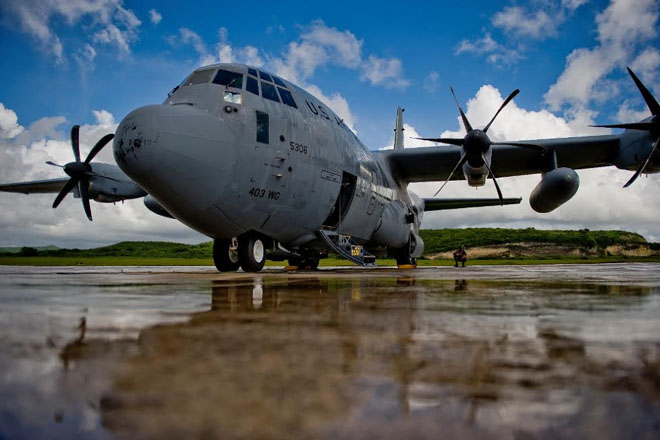 Basseterre, St. Kitts — For the first time, St. Kitts and Nevis will be hosting an Air Force Reserve Command’s WC-130J “Hurricane Hunter” from April 23 – 24 2015 at the Robert L. Bradshaw International Airport. The visit of the high-wind, medium ranged aircraft that is used in weather reconnaissance missions, is part of the St. Christopher Air and Sea Ports Authority’s 2015 Hurricane Awareness initiative and the National Oceanic and Atmospheric Administration (NOAA) and US Air Force Reserve’s Caribbean Hurricane Awareness Tour (CHAT).

Meteorologist, St. Christopher Air and Sea Ports Authority, Elmo Burke highlighted that the public tour of the aircraft will be opened to specially invited guests – namely, Government officials, media and secondary schools students on the island.

“The tour of the aircraft is slated for Friday 24th April 2015 starting at 9:00 a.m. Due to the limited time for tours, we are partnering closely with the media to bring details of the tour to the wider public by affording the media the opportunity to tour with officials and other invited guests.”

The tour of the “Hurricane Hunter” will offer an opportunity to learn how scientists collect hurricane information and assist the community in gearing up for the upcoming hurricane season and weather storms.

“Last year, Mexico was battered by six tropical cyclones, including two from the Atlantic basin and four from the eastern North Pacific. One of these was Odille, a major hurricane that struck the Baja California peninsula,” U.S. National Hurricane Center Director, Rick Knabb said. “This tour is a crucial opportunity to work with our partners in Mexico and throughout the Caribbean to prepare for the next hurricane and reduce the human and economic toll.”

The aircraft flies directly into the core of tropical cyclones to gather data that are critical for forecasting a hurricane’s intensity and landfall. The data are sent in real time via satellite from the aircraft directly to the National Hurricane Center for analysis and use by hurricane forecasters.

According to Burke, the visit of the aircraft to the Federation has garnered attention from regional Meteorology officials.