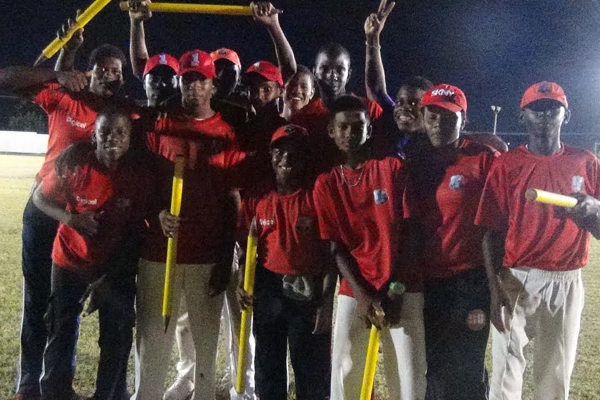 Sports Page — The Nevis under seventeen representative team, was the dominant force at the Postal Services cricket festival which was held on Saturday 7th February.

The event which was previously scheduled for the end of last year, was postponed due to inclement weather but head of the Postal Services on Nevis, Ms Rhonda Forbes-Williams was determined that after all of the hype and chatter leading up to the event, that it must be held.

Initially some four teams were scheduled to participate: Water Department; Public Works; the under 17 team and the Postal Services team.

However, on the night, the Public Works and Water Department teams, showed up short of players and eventually united to form one team.

In the first encounter, the Postal Services team engaged the under 17 team.

The under 17 players batted first and scored a competitive 109 for 4 in their allotted 12 overs. Tiwan Prentice top scored with 27; Jamie Cornelius scored 19 and Keon Pemberton 11.

The Postal Services team was eliminated from the competition after only managing to score 73 for 6 from their 12 overs. The top scorer was Alec Williams who is the son of Postmistress Ms Rhonda Williams. He scored an impressive 36.

The combined Water Department and Public Works team had received a bye into the finals and thus engaged the under 17’s.

The under 17 team again batted first and this time scored 99 for 7 from their 12 overs. Balgobin scored 29; Senaldo Willet 19; Keon Pemberton 16 and Tiwan Prentice 11.

The Water Department/Public Works team looked to be making a match of it, after a glorious cameo by Godwin MIKE Browne who struck a blistering 24 in just about 10 balls faced.

However after he went and with Janice SPEECHLESS Nisbett at the crease, the under 17’s played some smart cricket, in keeping Nisbett on strike, even refusing to hold catches that she offered and eventually won the game quite handsomely.

Oneil DADDYSHAKES Walters 16; Philo Wallace 11; A. Bartlette 10* and Janice Nisbett 4*, were the other main contributors in the eventual total of 79 for 4 from the allotted 12 overs.

The under 17 team celebrated gleefully and were obviously delighted to raise the trophy.

At the presentation ceremony chaired by Carl Tuckett, Ms Williams noted that the competition in reality was the one slated for 2014 and that there will be a repeat event towards the end of this year to celebrate world postal services day. ‘It will be bigger and better,’ she stated.

The outstanding players for the competition were presented with trophies as follows:

The MVP for the tournament was young Sharma

The most outstanding female was Senaldo Willet