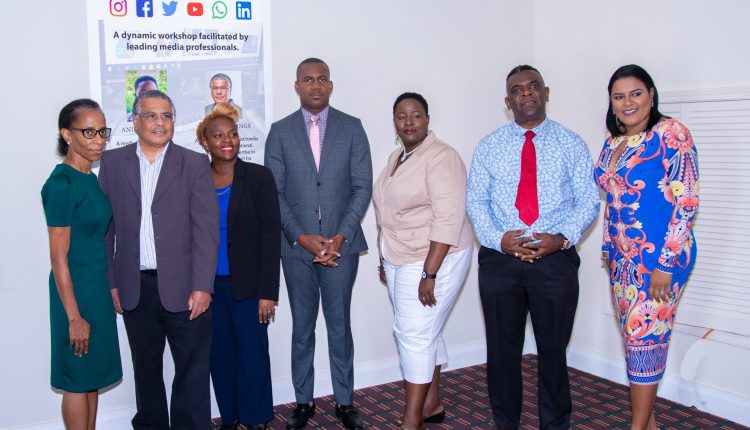 An opening ceremony to launch the opening of a UNESCO sponsored workshop dubbed “Training Media Workers in the Effective and Proper Use of Social Media” was held on Tuesday at the Ocean Terrance Inn.

The 3 day workshop is being hosted by the University of the West Indies Open Campus on St. Kitts and runs from May 14 to 16 2019.

In her welcoming remarks, Programme Officer at the UWI Open Campus St. Kitts, Cicely Jacobs explained how the collaborative effort between the UWI and UNESCO came about.

She explained that discussions of the Media Training workshop were held since late 2018 but experienced quite a bit of delays.

Jacobs said thankfully, all the efforts and hard work paid off considering that the workshop is now ongoing.

The workshop is facilitated by two Caribbean media professionals namely, Wesley Gibbings from Trinidad and Tobago who is the founding President of the Association of Caribbean Media Workers and Anika Kentish from Antigua and Barbuda.

Kentish noted said the purpose of the workshop is to introduce media workers in St. Kitts and Nevis to the effective and proper use of social media and the platforms that exist.

She then applauded Secretary General to the St. Kitts and Nevis National Commission for UNESCO, Antonio Maynard for his efforts.

Meanwhile, Minister of Education, Hon. Shawn Richards thanked The University of the West Indies for initiating the project.

A total of 50 participants are participating in the 3 day training workshop.