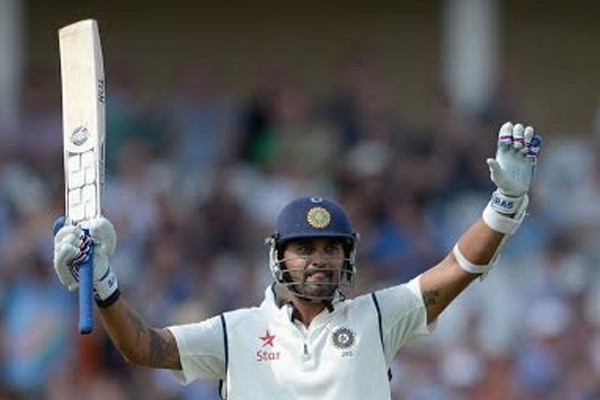 Sports Page — Fourth Test century – his first away from home – held India’s innings together on a first day that was full of momentum shifts on an atypically slow and lifeless Trent Bridge pitch. India suffered jolts at a number of critical junctures; the double-loss of Cheteshwar Pujara and Virat Kohli immediately after lunch could have proved particularly debilitating. But Vijay batted calmly through the day to end up on unbeaten 122, as India shaded an absorbing start to the Investec Test series.

The rest of the match could hinge on two selection calls, one by each team. India handed Stuart Binny a debut, giving themselves an extra seam option at the expense of a specialist batsman in Rohit Sharma. England brought in Ben Stokes for Chris Jordan in a straight swap. Stokes, who had made a Test hundred in Perth batting at No. 6, was now penciled in at No. 8.

When MS Dhoni – none of whose six Test centuries have come outside the subcontinent – walked in at 178 for 4 after Liam Plunkett’s around-the-wicket ribcage attack had prised out Ajinkya Rahane in the first over after tea, it could have gone either way. But Dhoni was hardly troubled. With little extra bounce or movement that often exposes his lack of footwork, Dhoni moved to 50 by stumps, having scored at a strike rate of nearly 80 without particularly going after the bowling. He also saw off nine overs of the second new ball.