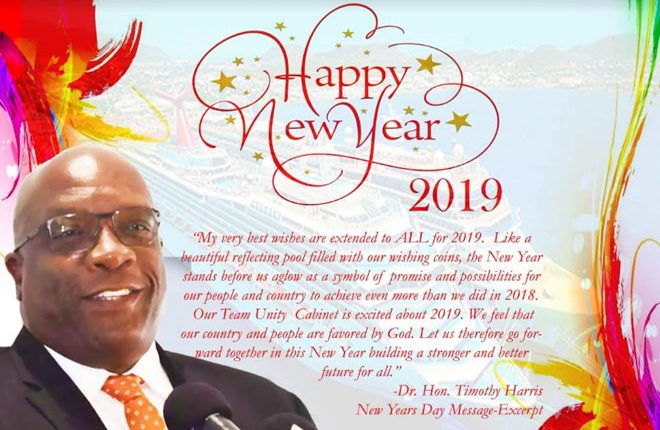 Basseterre, St. Kitts, January 01, 2019 (SKNIS): While extending his best wishes to the Federation for 2019 in his New Year’s message, Prime Minister Dr. the Honourable Timothy Harris reflected on the tremendous success of 2018 and assured that his administration will continue to build on the foundation it formed for a more prosperous future for all.

“We commence 2019 from a unique position. Having sustained positive economic growth for four years in a row, we can build on this momentum and continue to create the right economic conditions for citizens and residents,” he said. “Our people expect more jobs, the opportunity for higher wages and salaries, increasing FDIs, and overall improvement in their quality of life.”

In his 2019 Budget Address, the prime minister outlined several growth drivers in the economy and ways in which his administration will keep the sustainability of these drivers. He said that this will be done by greater agricultural production, strengthening the manufacturing sector, a surge in construction and expanding tourism among others.

“We budgeted $150 million of capital expenditure to improve the quality of life and living in St. Kitts and Nevis,” he said.

He also said that the government will continue to invest in the socio-economic infrastructure of the country.

“This is an enduring theme for this Team Unity Government and the country. We anticipate further improvement in our Security infrastructure to wit the construction of the Sandy Point Police Station, the completion of our Coast Guard, the Customs Annex building and the widely anticipated BHS (Basseterre High School),” he added.

He also noted that the Old Road Bay Rehabilitation and Expansion Project will get started in 2019 as a part of the commitment to rebuild the road in a more resilient way.

Additionally, he said that the government expenditure projects will be complimented by major investments such as the further build out of the Second Cruise Pier, housing developments by the National Housing Corporation (NHC), and the Development Bank through the robust implementation of the government employees’ mortgages programme.

Prime Minister Harris highlighted that the health and well-being of the people are at the heart of the government’s agenda. He said that the St. Peter’s Health Centre will be started, as well as the continuation and completion of the Tabernacle Health Centre.

“These centres will be important access points for good quality health care so that people can seek care for themselves and get better faster. We care for our people. The health of our people is critical to the well-being of our nation,” he said.

“Like a beautiful reflecting pool filled with our wishing coins, the New Year stands before us aglow as a symbol of promise and possibilities for our people and country to achieve even more than we did last year,” said Prime Minister Harris.