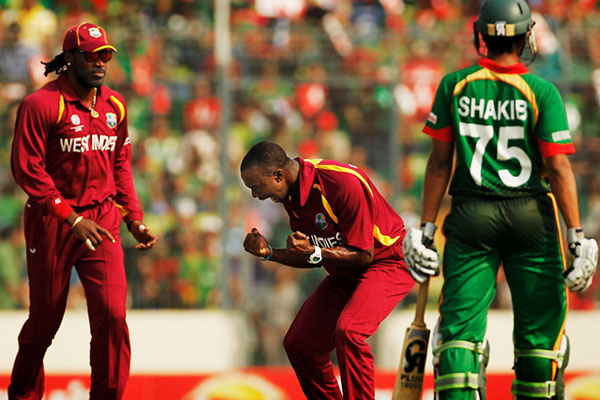 St. George’s, Grenada, CMC — West Indies and Bangladesh play the first of three One Day Internationals here on Wednesday with much to prove following a trail of poor performances in series this year.

The two sides are renewing a rivalry which reached a thrilling high point when Bangladesh, with a gritty performance, clinched a tie-breaker to earn a 3-2 win in their last ODI series at home.

“I am excited with the one day team that is selected. We are ten games away from a prestigious tournament which is the 2015 World Cup so this is part of preparation,” said Bravo.

“It is an opportunity for us to start back winning cricket games and winning series”.

Seven members of the Bangladesh outfit have toured the West Indies before while the likes of Mominul Haque, Nasir Hossain, Shamsur Rahman and Sohag Gazi have visited with Bangladesh-A.

Only Anamul Haque, Taskin Ahmed and Al-Amin Hossain have not toured the Caribbean.

“I enjoy playing cricket here personally. The last time I played here I got six wickets in an ODI game against Zimbabwe so it’s good to start here and it’s always good to play on grounds that you have good memories,” the captain said, referring to the National Stadium in Grenada

“Let’s hope that the luck remains and things continue to go in our favour.We have two games here and if we can close the series of right here in Grenada it’s gonna be good”.

The visitors are expected to rely heavily on the in-form captain Mushfiqur Rahim who will be hoping that Tamim, Nasir, Mahmudullah, Razzak and Gazi would return to form.

Bangladesh will have high expectations of main strike bowler Mashrafe Mortaza but would harbor concerns for their spin attack since Abdur Razzak and Sohag Gazi have been poor so far this year despite playing all their cricket in home conditions.