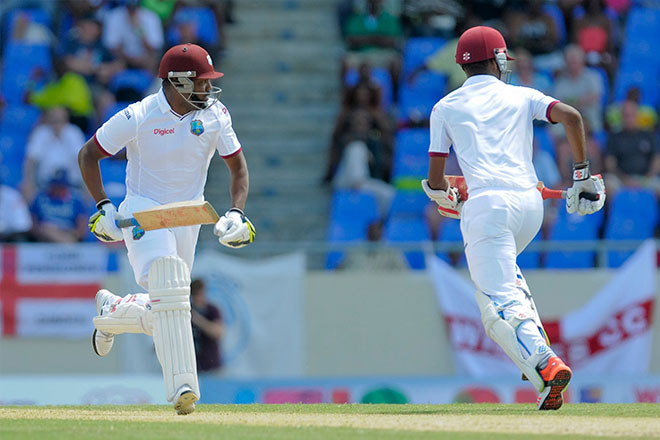 North Sound, Antigua, CMC — West Indies were staging a gutsy fight-back against England at stumps on the second day of the first test at the Vivian Richards Cricket Stadium here Tuesday.

Veteran Shiv Chanderpaul and Jermaine Blackwood crafted an unbeaten half century partnership as the homeside fought doggedly to lift themselves out of danger following crippling setbacks in the post lunch and post tea sessions.

They were 155 for four at the close with Chanderpaul and Blackwood unbeaten on 29 and 30 respectively while opener Kraigg Brathwaite went for a patient 39 and Marlon Samuels 33.

Earlier the West Indies pacers bowled with a tight line and length to significantly restrict England batsmen, bowling them out for 399 after they resumed from an over 341 for five.

However, led by James Anderson England hit back after lunch as Windies batting faltered and fumbled and by the close they were seeking , again, to ease their way back into contention.

West Indies trail by 244 runs with six wickets remaining in a match which saw the momentum swung back and forth.

Their bowlers rebounded from a beating on the opening day to remove the second half of England’s innings for just 58 runs, in a morning session they completely dominated.

Ben Stokes was prevented from reaching a century, adding only 8 runs to his overnight score of 71 before he was caught at gully while opening the face of the bat to a delivery pushed across his body by Jerome Taylor.

Roach’s four wicket haul included Jos Buttler and Stuart Broad who were both removed without scoring while Taylor finished with 3 for 90, Jason Holder 2 for 69 and Marlon Samuels picked up the last wicket in James Anderson.

Anderson, who scored 20, mistimed a shot at short cover and dollied a ball to Holder but only after a stubborn last wicket stand with Chris Jordan which produced 38 runs.

West Indies faced three overs before the lunch break but then slumped to 42 for two in the post lunch session as England gained the upper hand.

Opener Devon Smith went for 11 after he was forced to play and got an outside edge to Jos Buttler while Darren Bravo departed shortly after, caught by Buttler off Chris Jordan for ten.

Bravo was attempting to leave Jordan’s delivery but raised his bat to late and paid the price for his indecision.

It ended when Samuels, who scored 33, pressed forward to Stuart Broad only to get a thick edge which carried low to Buttler.

Brathwaite departed next, victim of a stunning catch taken by Chris Jordan at slips who plucked the ball a fraction from the turf after he prodded to a delivery from James Tredwell.

Chanderpaul, who counted five boundaries and Blackwood with four fours and a six to his credit, have already compiled 56 runs for the fifth wicket and will be hoping to continue from where they left off when play resumes on Wednesday.

The two have so far batted sensibly with Blackwood given a lifeline when he was on 21, steering a ball to Alastair Cook at slips only for the replay to show that Ben Stokes had bowled a no ball when he overstepped the line.