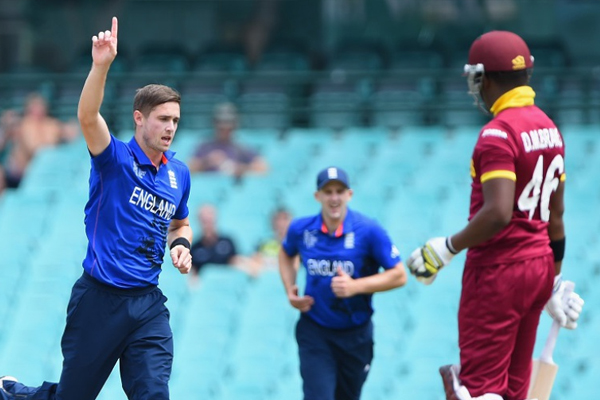 Sports Page — Despite resting both their most experienced bowlers, James Anderson and Stuart Broad, England bowled out West Indies for 122 in the 30th over of the innings.

Chris Woakes made excellent use of a green-ish pitch offering bounce and movement and claimed 5 for 19, including two wickets in the opening over of the innings when he came within an hair’s breadth of taking a hat-trick.

If his first wicket, that of Chris Gayle, owed something to fortune – the batsman was surprised by the bounce and gloved a catch down the leg side – the second was a fine delivery, angled across Darren Bravo to take the edge. Both men had lasted just one delivery. Marlon Samuels played at the hat-trick ball, but made no contact.

West Indies never really recovered after that. Samuels missed an agricultural heave against Steven Finn and Dwayne Smith was well taken at slip after edging a beauty from Woakes that drew him into the stroke and left him. At the end of the power play, West Indies were 42 for 4.

The Windies batsmen eventually succumbed to 122 all out in just 30 overs.

The Englishmen wasted little time getting to the target—