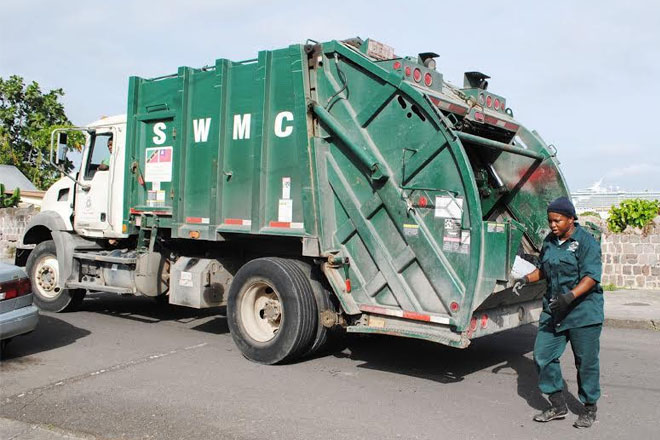 Woman loader at Solid Waste: Samantha fits the bill – is equal to any of the guys

Basseterre, St. Kitts — On a hot Wednesday afternoon two weeks ago, a group of persons leaving the ferry terminus in Basseterre after disembarking from a passenger boat coming out of Nevis slowed down their steps as they looked in awe as a young woman busied herself away.

Amid the din of loud music and high pitched voices as people talked loudly to hear each other, a woman from among the arriving passengers was heard to tell a man companion: “It looks like this young woman works for Solid Waste.”

“How you could tell?” asked the man who was pulling a suitcase on wheels as he manoeuvred to avoid colliding with persons walking aimlessly minding their own business, as they strode into different directions.

“She is wearing a shirt with a Solid Waste logo and she is throwing those carton boxes full of trash into the Solid Waste truck,” said the woman. “This must be a very brave woman to do this job and I applaud her employers for giving her the opportunity to challenge men in doing what they think they are best at.”

As they walked away from the Solid Waste truck, which was parked in front of the gates to the dock area facing the mountain side, what else they said about the lady was drowned by the loud music and voices. They entered a private car that was waiting for them and as they were being driven off they kept on looking at the lady.

Welcome to the world of 25-year-old Ms Samantha Harrigan, the newest star in the Solid Waste Management Corporation SWMC (St. Kitts) galaxy. She works as a regular loader on the Solid Waste’s 4:30 pm garbage pick-up shift in the Basseterre area.

A simple but straight talker, Ms Harrigan is the mother of two young girls who after a number of trials and errors in the restricted job market St. Kitts offers voluntarily settled on the Solid Waste job as a loader even after the man recruiting her tried to discourage her. She has since proven him wrong.

Today Mr Wilmon McCall, Operations Supervisor at Solid Waste, is full of praise for Ms Harrigan. The organisation would have employed three women loaders in the past but the experience it had with them is not anything one would prefer to talk about. However, Ms Harrigan has outdone those before her and is even doing more.

“Samantha is doing a double shift,” explained Mr McCall. “She works the first shift; she goes home where she does her work then she comes back and works a second shift. We hardly ever ask a woman to do that. In fact most of them are not strong enough to do that, but Samantha has proven herself to be equal to any one of the guys. That is what singles her out.”

Ms Samantha Harrigan is a proud Kittitian who was born in Conaree where she lived around the ‘Dump’ as the Solid Waste landfill site is referred to by the general public. A bright girl, she attended the Beach Allen Primary School and then the Basseterre High School, but fell off the education train at fourth form following the unexpected arrival of her daughter.

While looking after her daughter she attended night school to make up for the lost opportunity and she was able to acquire some subjects. However, with the daughter to look after, she was not able to acquire enough subjects.

A committed and responsible mother who now lives in Cayon, she decided to look for jobs to help her put food on the table. She worked at different places in the hospitality industry but with the prevailing economic situation she was laid off from two places. She opted to join the People Employment Programme (PEP), where she was attached to a farm in Tabernacle.

“I was on the PEP until March this year,” said Ms Harrigan who has since gotten a second daughter. “I needed another job and I needed it now. I put my application at various places but got no call back. As for Solid Waste, I talked to Mr McCall on a Friday and he told me to come and put in an application, so I did that the Monday and by Tuesday I got my interview.”

Unlike many who apply to come to Solid Waste when there is nothing else available, Ms Harrigan came on a position of strength as she already had a job with the PEP.

“I like to have varieties, I do not like to just be in one place,” explained Ms Harrigan. “I like to work in an environment where they give you the opportunity to move up. I know at Solid Waste they have chances where you can move up.”

She chose to be a loader. Asked if she would not have problems in the lifting of the heavy garbage bins, she said that she was used to heavy lifting as her mother burned coals and Samantha had been assisting her to carry the heavy loads.

“I was put on the Irish Town/McKnight area on the 4:30 pm shift, and it was okay with me,” said Ms Harrigan. “I have to travel to town from Cayon every day to come and do my job. Every now and again they would give me another shift to do. It ranges from 4 in the morning to 12 midday. I have worked at Dieppe Bay, Parsons Ground, Saddlers, Molineux, Phillips, New Town, Taylors and all those are different shifts for each village.”

She does her job with aplomb. And yes, she makes heads turn.

“Mostly the men would admire and give me compliments and praise me, and the older women would say yes finally a girl doing the work,” explained Ms Harrigan. “But the younger ones (women) now those are the ones who will screw up their face and watch me like I am a disgrace and stuff like that, but I do not pay them attention, because I know that once I am through with the job I could be as smart as any of them.

“My mother encourages me as her boyfriend also works on the truck and, yes my family has been encouraging. My colleagues give me praises for they say they could not see themselves doing that, so I have a load of faith and a load of courage to move ahead and do what I have to do.”

Having grown up around the landfill in Conaree, where as a child she would go to rummage along with other children from the neighbourhood, the stench was not so overbearing and she has managed, although in the first weeks at the job she would wear protective masks.

Since Ms Harrigan has been on the job, two more women have joined Solid Waste also working as loaders. Operations Supervisor Mr Wilmon McCall feels that with Ms Samantha Harrigan leading the way, that the other two will weather the storm and prove themselves.

“Ms Harrigan made the transition very easy in my view,” ended Mr McCall. “When she came for her first meeting she demanded to have her nasals and her masks so that she could protect herself from the fumes. She also demanded to have her inoculations to protect herself from diseases, so I told her sure no problem. I realised she was strong and her spirit was very high. I think we made a good choice in Samantha.”