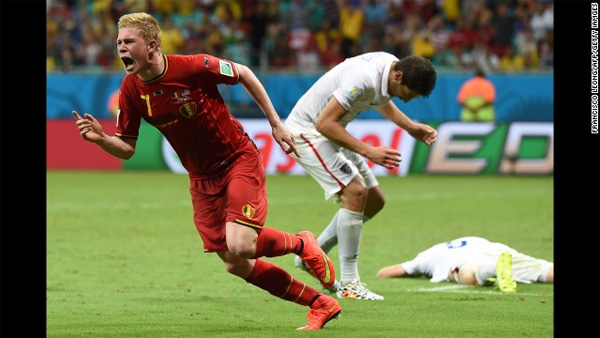 But perhaps the vanquished United States soccer team can rest in the knowledge that if the World Cup was decided on guts, it would surely be lifting the trophy in Brazil.

For 120 minutes of Tuesday’s ultimately unsuccessful last-16 clash with Belgium, each one of Jurgen Klinsmann’s men left everything on the field in Salvador.

From the second the Americans went 2-0 down in extra time thanks to goals from Kevin De Bruyne and Romelu Lukaku, the rearguard action started.

Substitute Julian Green’s goal offered the nation a lifeline and energized its fatigued players with a quarter of an hour to play.

And you could almost hear the sigh of despair from New York to Nevada as late chances for Jermaine Jones and Clint Dempsey were agonizingly spurned.

The final whistle signaled tumult at either end of the emotional spectrum as Belgium advanced to a quarterfinal with Argentina on Saturday and the U.S. departed.

Beaten, yes, but not bowed.

“It’s hard for us to end up on the losing side after 120 minutes of giving absolutely everything,” Klinsmann told reporters.

“But this game had everything, it was a thriller. We had chances to equalize, but congratulations to Belgium.