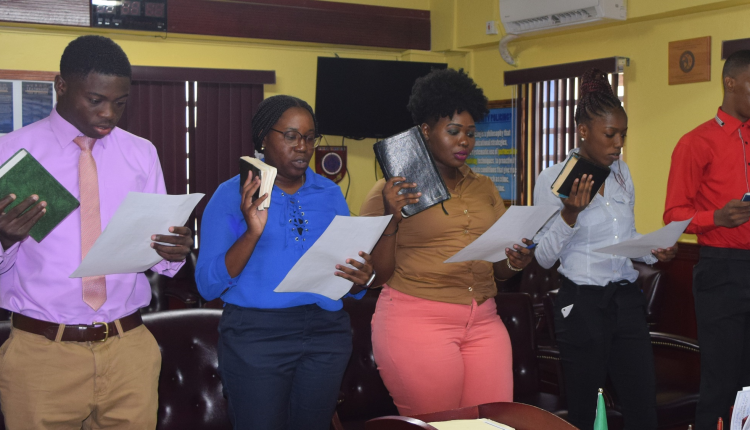 Young people inspired to answer the call to serve their country

Maruca Nisbett, Tyrique Nicholas, Sherisa Seaton, Laricia Ottley and Zendan Clarke each took the Oath of Office at a brief ceremony which was held at the Police Headquarters in Basseterre.  At the event, Commissioner of Police Hilroy Brandy welcomed the recruits, lauded them for their decision to join the Force and encouraged them to respect the uniform.

“Let me take the opportunity to welcome you to the Police Force as recruits. You are no longer civilians, all five of you are now sworn in as Police Officers. You now have to conduct yourself in a disciplined way so that persons can see you, emulate you and respect you,” he said.

“Honest, trustworthy, respectful…all of these are essential if you are going to give the kind of quality service that the public demands of you…You are going to earn the respect of the public by the way you conduct yourself. I wish you all the best and I am looking forward to many productive years. The Police Force is focusing on community policing; building relationships between the Police and the public, working together to solve problems in society…I want you to embrace this concept,” he stated.

Force Personnel Officer, Clifford Govia, encouraged the recruits to take advantage of the many opportunities that are available in the Force and thanked them for their decision to serve.

“We really value you as young people wanting to serve your community at this particular point, and we want to express our gratitude to you for that…This is your opportunity to display that you are the best and brightest of our society and you have selected one of the best professions…if you love your country, there is no greater calling one can embark [on] and endorse than service,” he said.

The recruits expressed their appreciation for the opportunity to serve and shared their own sentiments.

Recruit Seaton said, “I’ve decided to join the Police Force because I have been working at the Telecommunications Department for a year between the Officers and they have inspired me to become an Officer. I’ve always had an interest in policing, specifically in the Criminal Investigation Department.”

“I joined the Force because I’ve always had a military background and now I think it is time for me to try something different, move on and have the Police as a different form of growth,” stated Recruit Nisbett.”

“I decided to join the Police Force because my father was a Police Officer and I am also interested in being a Police Officer. I want to set goals, set standards and serve and protect the people of this country. I would like to work with the Drug Squad or Crime Scene Unit,” said recruit Ottley.

Persons interested in having a fruitful career in policing are encouraged to consider joining The Royal St. Christopher and Nevis Police Force.  Recruitment is conducted throughout the year and application forms can be collected from the Force Personnel’s Office located at the Police Headquarters on Lozack Road. An application form can also be requested by sending an email to forcepersonneloffice@police.kn.  For more information about the process, interested persons can also call 465-2241 ext. 4272, 4217 or 4279.