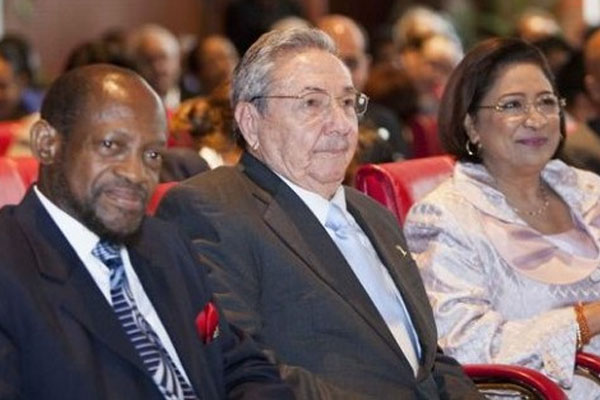 Basseterre, St. Kitts, (CUOPM) – CARICOM member states joined the international community at the UN General Assembly to again criticize the isolation of Cuba by the United States’ imposition of a economic, commercial and financial blockade.

Speaking on behalf of the 14-member states of the Caribbean Community (CARICOM), St. Kitts and nevis’ Permanent Representative to the United Nations, His Excellency Ambassador Delano Bart said the regional organmisation “aligns itself with the statements made by the representatives of the Group of 77 and China, the Non-Aligned Movement and the Community of Latin American and Caribbean States.”

He told representatives that every year for the past twenty-two consecutive years they gather in this similar setting to sound their voices with many others of opposition to the United States imposition of the economic, commercial and financial embargo against the Republic of Cuba.

“For fifty-three (53) years, the Cuban people has endured severe economic loss and stagnation, preventing the expansion of Cuba’s commercial ties with the rest of the world. The embargo has persisted for too long, in spite of the unambiguous reproof of an overwhelming majority of Member States, as demonstrated by the annual adoption of the text of the draft resolution before us (A/68/L.6),” said Ambassador Bart, who spoke on behalf of Antigua and Barbuda, the Bahamas, Barbados, Belize, Dominica, Grenada, Guyana, Haiti, Jamaica, St. Kitts and Nevis, St. Lucia, St. Vincent and the Grenadines, Suriname and Trinidad and Tobago.

He noted that last year, 188 Member States voted in favour of that resolution.

“Mr. President, the United Nations is made up of 193 Member states. This speaks volumes in the international community! However the people of Cuba continue to stifle from this blockade. The Social, Economic and Humanitarian Cost of the Embargo are becoming more and more acute,” said Ambassador Bart, who added:

“Cuba’s safety, advance preparedness and pace of recovery are compromised by the embargo’s many direct and indirect effects. Indeed, it is in such times of national crisis that the fundamental injustice of the Cuban embargo is brought into sharpest relief. When viewed in the light of the generosity and selfless assistance that Cuba has kindly accorded to other States in times of need, the unilateral application of the embargo against Cuba is seen to be especially ill- conceived. Such events underscore the significant need not for intensification of punitive measures but, rather, for greater regional and international cooperation and solidarity.”

He stated that as a bloc of States that are small in size, the Caribbean Community attaches great value to the strength that lies in collective capacity, will and a firm stance on common principles that promote their shared objectives.

“Those principles include adherence to the Charter of the United Nations, multilateralism, sovereignty and free trade. It is in that spirit that the Caribbean Community has remained unstinting in its solidarity with Cuba and in calling for an end to the embargo, which runs counter to both the letter and spirit of the Charter and serves no justifiable legal, political or moral purpose within contemporary international relations,” said the St. Kitts and Nevis diplomat.

Ambassador Bart further pointed out that despite such significant challenges, Cuba continues to show itself to be a key regional and international partner and actor.

“CARICOM member States, in keeping with our policy of mutual respect, good-neighbourliness and respect for the principles of the Charter of the United Nations, have a camaraderie with Cuba that has remained cordial and resilient even through a continually evolving hemispheric and international geopolitical landscape. Cuba maintains Embassies in all independent countries of the Caribbean Community and continues to show itself to be an integral part of the Caribbean,” he said.

Ambassador Bart further pointed that CARICOM and Cuba have developed and enjoy mutually beneficial programmes of cooperation and trade in a number of key areas, including physical education and sports, accounting, the natural sciences, the humanities, the economy, special education, health and medicine.

“In that regard, CARICOM also profoundly appreciates Cuba’s proposal for other areas of cooperation with the Community, such as the treatment of physical disabilities, the arts, language training, agriculture and fisheries, water and infrastructure. In the Caribbean alone, Cuba has built hospitals and clinics, provided medicines and furnished doctors, nurses and other health-care professionals — contributions that continue to be received and remembered with the utmost appreciation,” he said.

Ambassador Bart also told the world body that students from the Caribbean Community have benefited from university educations in Cuba free of charge, and Cuba has unselfishly extended much generosity to the CARICOM member State of Haiti, following the devastating earthquake there.

During the fourth CARICOM-Cuba Summit, held in December 2011 in Port-of-Spain, the Heads of State and Government of CARICOM issued a statement strongly rejecting the imposition of the embargo and its extraterritorial effects, and celebrated the outcome of the Summit in its reinforcement of the strong fraternal bonds between CARICOM and Cuba.

“The CARICOM member States also continue to value and enjoy long-established, warm and friendly relations with the United States of America. It is in that spirit that we urge its Government to heed the calls of the international community to end the embargo. In that regard, we also encourage engagement in a constructive process of dialogue and normalization of relations. We believe that would be in the interest of all parties and would significantly contribute to greater peaceful development and cooperation within the Americas,” said Ambassador Bart, who added that “at the risk of discrediting our efficacy as an organization, we must not be content to be a mere symbol of change.”

“Accordingly, CARICOM delegations fully support the draft resolution before the General Assembly entitled “Necessity of ending the economic, commercial and financial embargo imposed by the United States of America against Cuba,, and we will vote in favour of its adoption,” the St. Kitts and Nevis Permanent Representative concluded.

The body, which includes 193 UN member countries, approved, for the 22nd consecutive year, the resolution calling for an end to the blockade, with 188 nations voting in favour.

Opposed were the United States and Israel, while Micronesia, Palau and the Marshall Islands abstained.

Prior to the vote on the proposed resolution, the Community of Latin American and Caribbean States (CELAC) and the Common Market of the South (MERCOSUR) denounced the blockade as a violation of the UN Charter and international law.