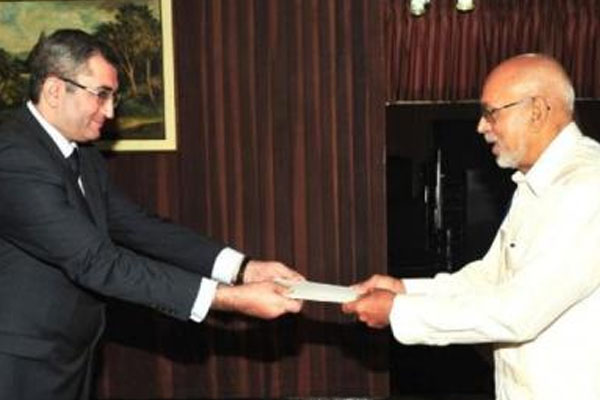 In a statement, Guyana’s foreign minister, Carolyn Rodrigues-Birkett, said, “His Excellency Elnur Ikhtiyar Oglu Sultanov today became the first ambassador of the Republic of Azerbaijan accredited to Guyana. Azerbaijan is one of the leading countries in the oil and gas sector. Indeed a few years ago, fueled by oil and gas, their GDP grew by over 30% — the highest in the world.”

Rodrigues-Birkett added, “Azerbaijan has the distinction of being the first country in the world with a Muslim majority that is a democratic and secular state.”

Guyana’s cooperation with Azerbaijan was mostly negotiated at the multilateral level at the United Nations and the Organisation of Islamic Cooperation (OIC).

Sultanov and the Guyana foreign minister discussed the strengthening bilateral ties between their two countries.

“Ambassador Elnur indicated that his country is willing to offer scholarships in the oil and gas sector among other areas. We will pursue this,” added Rodrigues-Birkett.

Azerbaijan, which was one of the former republics of the Soviet Union, is one of the richest countries in the world and is located in the Caucasus. The Turkic speaking country is north of Iran, and has strong ties with Turkey, Israel and the West.