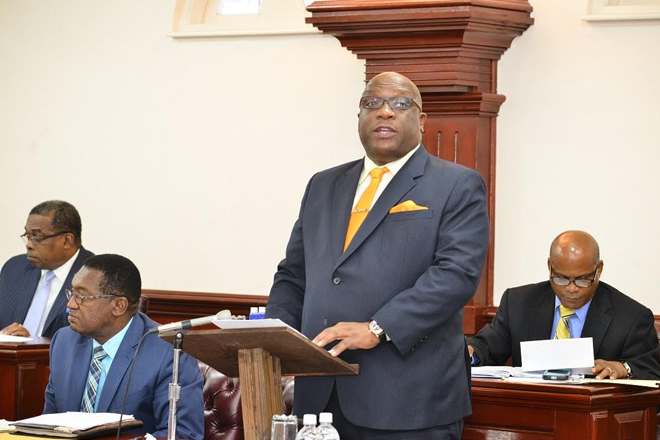 (SKNIS): The BAICO (Plan of Arrangement) Bill, 2016, passed in to law at the Sitting of the National Assembly today (August 23) will “provide the legal framework to implement a plan of arrangement to resolve the long outstanding matter of payments to the policy holders of the failed British American Insurance Company (BAICO)”, according to Prime Minister and Minister of Finance, Dr. the Honourable Timothy Harris, who brought the Bill to its fruition.

The Plan of Arrangement is a statute based court approved legal process under which BAICO may enter into an arrangement or compromise with their creditors.

Prime Minister Harris said that “the ECCU is approaching the problem in a coordinated way”and that “each country has to pass the law.” He outlined that Montserrat passed Plan of Arrangement (BAICO and CLICO) Act No. 5 of 2016, on 27 June 2016 and that a similar Bill was passed in Parliament of Dominica. The Bill was approved in Antigua and Barbuda (2015), Grenada in July 2015, St Vincent and the Grenadines in October 2015 and Anguilla in November 2015.

“Mr. Speaker, I have looked at legislation in Antigua and Barbuda, Montserrat and Dominica. They are more or less identical. Semantic changes to do with name of territory or country etc. but in substance all of them are the same. This is in keeping with the harmonized approach to legislation on this matter.

“This company has had a long period of service to the people of the region including of us in the OECS, Barbados, Trinidad and Tobago and The Bahamas. Regrettably it became insolvent in 2009. It was placed into Judicial Management in late 2009 in numerous jurisdictions including the Bahamas, Antigua and Barbuda, Grenada, Montserrat, St Kitts & Nevis, St Lucia and St Vincent & the Grenadines. The Anguilla branch was also placed in administration at this time and an Agent of the Judicial Manager was appointed in Dominica. The suffering has been long and hard,” said Prime Minister Harris.

“Today we offer a Plan of Arrangement which will allow for the parties affected to receive some payments with the blessings of the Court, the participation of the creditors and guidance of the judicial manager,” Prime Minister Harris added.

On 8th September, 2009, on the hearing of a petition filed by the Insurance Commission of the Bahamas, British-American Insurance Company Limited (BAICO) was placed under Judicial Management and Juan (John) M. Lopez of KPMG Restructuring Limited was appointed the Judicial Manager of the Company.

BAICO was incorporated in the Bahamas in 1920 and is a subsidiary of CL Financial Ltd. The failed insurance company operated subsidiaries, affiliates and/or branches throughout the Caribbean region whereby it sold life insurance, annuity business and other insurance products to policyholders.

Prime Minister Harris reported to the Parliament that the Judicial Managers of BAICO have “made significant recent progress regarding the proposal of a Plan to facilitate the distribution of BAICO’s assets to its policyholders.” According to him, the plan requires the requisite legislation to be passed in several OECS (Organization of Eastern Caribbean States) jurisdictions. The legislation is intended to “set out a framework for agreeing final claims against the company and will require a court-ordered meeting of creditors to vote on the proposals.”

Prime Minister Harris said that the Plan will be a court driven process with three critical elements: count driven process, approval of creditors, and distribution of BAICO’s assets on a consistent and equitable basis.

Dr. Harris said that “the most recent payment information revealed that 1,315 policy holders were paid totally $15.9 million.” He said that Phase 3 “is ongoing with $3.2m to be paid to individuals who applied” and that 7,384 creditors for the branches in the Eastern Caribbean (St. Kitts and Nevis included) were paid EC $103.4 million and that EC $22.7 million remains to be paid to applicants under phase 3.

“Mr. Speaker, this is a debacle that has been going on for too long. Many families have suffered financially, my government is indeed pleased that we can legislate a plan that will lead to organize distribution of assets to creditors,” Prime Minister Harris said.