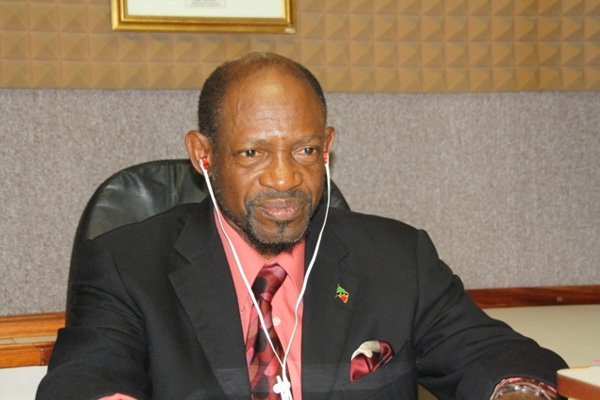 Basseterre, St. Kitts, (CUOPM)  — A call for the St. Kitts and Nevis Constitution to be changed to allow senators to actively participate in a Motion of No Confidence.

The call by a private citizen during the recent “Ask the Prime Minister” has solicited a response from the Federation’s Prime Minister the Right Hon. Dr. Denzil L. Douglas.

A Motion of No Confidence filed by the Opposition in the St. Kits and Nevis National Assembly remains tied up in the High Court awaiting declarations sought by the Speaker of the National Assembly, the Hon. Curtis Martin.

According to the St. Kitts and Nevis Constitution only elected members of the lawmaking body are allowed to vote on a Motion of No Confidence.

The male caller first commended Prime Minister Douglas and his team “for the tremendous work that they have been doing that has resulted in the pivoting of the Federation to the position where it is in the Caribbean and as well as in the world today. I believe that the team worked extremely hard and it needs to be well commended and highly praised.”

“The work of Patrice Nisbett has been very outstanding. He has been a Federal man even though he is a Nevisian from the NRP Party. It was important that he was drafted into the government and he has shown his strengths and works over the years. I think the people of Nevis especially, should highly commend Mr. Nisbett for the invaluable work and the good results that Nevis itself has been receiving.”

Mr. Skerritt, his work has been highly felt in St. Kitts and Nevis in the tourism sector business and his accomplishments. We should not take them lightly. Although he is senator, doing ministerial work, there seems to be a real outstanding limitation and that limitation lies in the fact that he cannot be involved in a very simple matter and that is this thing about a Vote of No Confidence,” said the caller to “Ask the Prime Minister.”

The caller further pointed out: “Why is it that he is able to get all these responsibilities, capable of making accomplishments for everybody and these accomplishments are much more important than what I call miniscule activity of participating in the Vote of No Confidence.”

He then recommended a revisiting of the 1983 Constitution of St. Kitts and Nevis.

“A re-visit will have to be made in the Constitution concerning certain things. I would like to make this one of the things, that is, deal with that section or that clause, that prohibits the senators from participating in this activity that they call the Vote of No Confidence,” said the male caller, who added that “if they can do justice in that area as we have been doing in other areas, I would suggest that that limitation be removed.”

In response, Prime Minister Douglas noted that earlier that day, on the “Good Morning St. Kitts and Nevis Programme” on Freedom FM, the Hon. Marcella Liburd was responding to a question that came from a caller that was making reference to the fact that there is so much disrespect being dished out to senators despite their accomplishments and despite their dedicated service that they have been providing.

“I think the Hon.  Marcella Liburd made the point that it is just about hypocrisy, hypocrisy on the part of the People’s Action Movement and their supporters now in Opposition, because as she said, and I want to share it here, the Constitution was created by the PAM Administration in 1983. They were the ones who introduced in the Constitution, the whole concept of senators being appointed to serve in the Parliament and given constitutional rights to also become appointed as Ministers of Government.

And as she said, one of their senators (Mr. Richard Caines) in those days was even the Minister of Finance, but today as the young man called in and said, there is so much abuse and so much disrespect being dished out to hardworking individuals, simply because they are outspoken in the Parliament in support of the Government’s agenda, even though they did not have a vote cast for them,” said Prime Minister Douglas.

“All that you are hearing is that ‘nobody vote for them (senators), nobody vote for them.’ So   because nobody voted for them, they don’t have a right under the Constitution it would appear to perform and to function. And that is part of the hypocrisy because those two senators today especially the Honourable Nigel Carty and Ricky Skerritt, they are there because the PAM Administration made it possible in that Constitution that was framed under them for this to happen,” said Prime Minister Douglas.

“They (PAM in Government) used it, but nobody else must use it after them. They had two Motions of No Confidence brought against them. They discarded the two motions. In one case, one waited for two years and nobody said anything about it, but today a Motion of No Confidence is not yet heard, 12 months have passed and it is a big thing for PAM because it has not been heard as yet,” said Dr. Douglas as the matter is in the court.

“They (Unity) placed the matter in the court and it is part of the hypocrisy that we are seeing coming from the Opposition. A whole lot of talk, a lot of criticism, criticizing what is happening today, but they can’t come forward with a credible solution and position that is different than what we are doing today as a government,” pointed out Dr. Douglas to callers.

He said what makes the hypocrisy even more stark naked is the fact that those in the so-called Unity Concept who are criticizing the most, were part of what the governing St. Kitts-Nevis Labour Government had set out to do and continues to do.

“That is the hypocrisy that we are talking about. There is no trust anymore in these people. There is just a talk to criticize, a talk to destabilize the country, a talk to create an uncertainty.