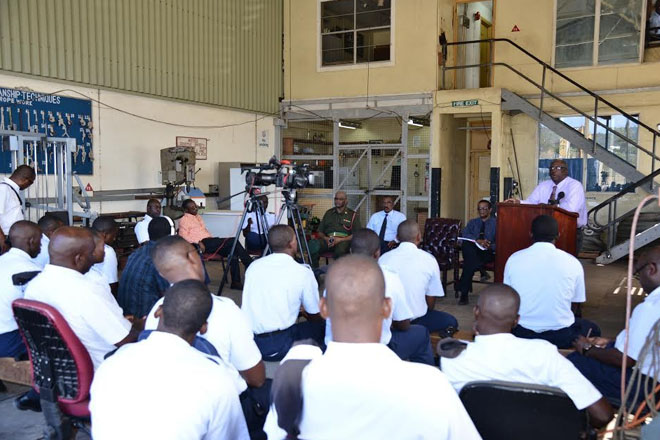 Capital projects for 2017 include improved accommodations for security forces

(SKNIS): The $19.1 million allocated for Capital Projects of the Ministry of National Security for the 2017 fiscal year will be primarily used to upgrade facilities used by the local security forces.

Construction of a new Coast Guard Base is one such project. During the Budget Address on Wednesday (December 07), Prime Minister and Minister of National Security, Honourable Dr. Timothy Harris, said the conditions at the Coast Guard Base were troubling, which included a leaking roof that affected members when it rained. Upon realizing the conditions, government made arrangements for a building to be rented from the St. Christopher Air and Sea Ports Authority (SCASPA) to temporarily house the officers.

A Coast Guard official said that the men and women of the St. Kitts-Nevis Coast Guard are using their expertise to demolish the building with assistance from inmates at Her Majesty’s Prison (HMP). When completed a new building will be constructed.

The inmates at HMP can also look forward to a completely new facility. Dr. Harris, who is also the Minister of Finance, said a new prison will be constructed at Estridge Estate. That project will commence in 2017.

Several police stations are also scheduled for physical upgrades, including the Newcastle Police Station in Nevis which has already been closed following a town hall meeting with the community. It will be demolished and reconstructed. The St. Paul’s Police Station is also to be closed and officers reassigned, while the building undergoes major overhaul. Community residents were also updated on plans at a town hall meeting and were reassured that the police will maintain a high presence in the area.

Prime Minister Harris said the prudent fiscal management of the economy has enabled government to carry out these important projects.

“That is why we are happy when we can speak to [Budget] surplus because its the surplus that we accumulate which must be our first thought to be used in support of the imperatives of our country moving forward,” he stated.

The $19.1 million for Capital Projects in the 2017 Budget represents a $3.7 million or 23.7 percent increase over the 2016 Budget. The 2017 Budget also proposed $52.7 million for Recurrent Expenditure which is an increase of $5 million or 10 percent over the 2016 allocation. The 2017 Recurrent Expenditure and Capital Projects figures added together means that the total allocation for the Ministry of National Security is approximately $71.7 million, the largest allocation ever for the ministry.