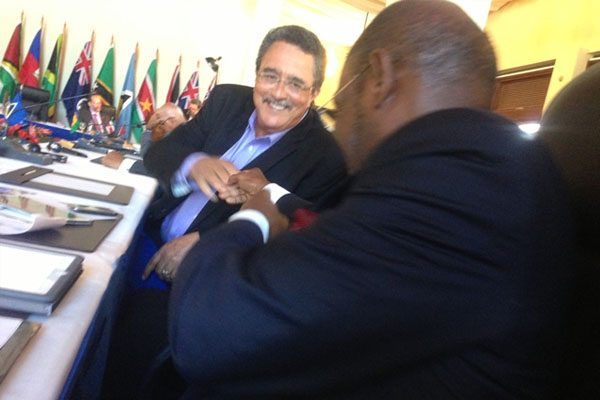 Kingstown, St. Vincent (CUOPM) — Caribbean Presidents, Prime Ministers, Premiers and Chief Ministers have lauded the longest serving Caribbean Head of Government for his 25 years of Service as a St. Kitts and Nevis parliamentarian.

At the closing plenary session of the Twenty-Fifth Inter-Sessional Meeting of the Conference of Heads of Government of the Caribbean Community (CARICOM) on Tuesday, the Chairman of CARICOM and Prime Minister of St. Vincent and the Grenadines, Dr. the Hon. Ralph Gonsalves led his Caribbean colleagues in lauding the Rt. Honourable Dr. Denzil Llewellyn Douglas on twenty-five years of political service as a Parliamentarian and for his sterling contribution not only to the Federation of St. Kitts and Nevis but to the Region as a whole.

The CARICOM Chairman in addressing the Conference on the attainment of this milestone by Prime Minister Douglas underscored his remarkable contribution to the sectors of health and education as the lead Prime Minister on Human Resource Development and health related issues.

Prime Minister Gonsalves further acknowledged the fact that none can refute that as the longest serving Prime Minister in the Community, the Region has benefitted from his wisdom and expertise as a son of the Region and a leading political luminary with whom they continue to confer on pertinent matters before the Community’s agenda.

Colleague Heads at the Meeting were unanimous in their commendation of Prime Minister Douglas stellar achievement in this regard.