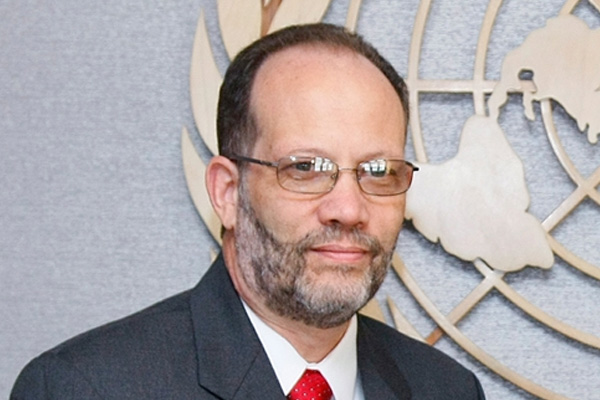 The ruling retroactively stripped tens of thousands of nationals from the Dominican Republic, mostly Haitians, of citizenship and rendered them stateless.

The secretary general was speaking at a ceremony where Haiti’s first plenipotentiary representative Peterson Benjamin Noel handed over his letters of credence at the CARICOM Secretariat’s offices Turkeyen, Georgetown, Guyana.

LaRocque noted that the Bureau of the Conference of the Heads of Government on behalf of the entire Community condemned the ruling, which violated regional and international human rights obligations. He said CARICOM would continue to provide support to Haiti as it fights for the respect for the rights and citizenship of members of its Diaspora.

The secretary general also remarked on the considerable progress made by Haiti, as it continued its reconstruction following the catastrophic earthquake of 2010. He said the thoughts and prayers of CARICOM would continue to be with the people of Haiti as they commemorate the anniversary of this tragedy on 12 January.

He noted that St Vincent and the Grenadines, Saint Lucia and Dominica would also be dealing with the aftermath of the devastating effects of a climatic event that hit hard during the Christmas season and conveyed his sympathies and support to those affected.

“I take this opportunity therefore to say to our brothers and sisters of the affected countries, as we had said to Haiti in 2010, that the Community is here for every member state and every CARICOM citizen, and it is here most especially in times of distress,” he said.

In his remarks, Noel also spoke of the 2010 earthquake, noting that the Haitian people were working hard to rebuild the country. He said the economy was growing and the business climate and security environment had improved.

The ambassador highlighted that Haiti should be seen and treated as an opportunity for the region and for each CARICOM country.

“I want to take this opportunity to advocate for my country and to encourage people from the region to take full advantage of the Republic of Haiti’s accession into the Community. Allow me to reassure you that all efforts are being made to fully integrate the CARICOM Single Market and Economy and to diversify our trading partners.” the ambassador said.

Noel noted that the Declaration de Pétion-Ville was signed recently, under Haiti’s leadership. He outlined that under the declaration, ministers from the region agreed to address the issue of people living with disabilities and special needs with renewed energy and dedication to the development of legal frameworks at the national level. Noel said Haiti looked forward to working with the CARICOM Secretariat and the Community on its implementation.