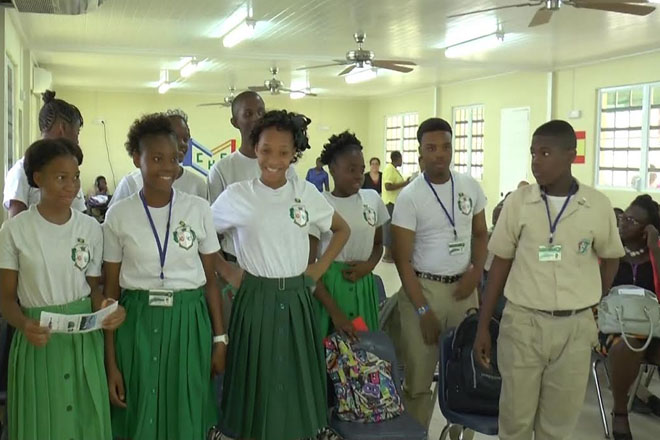 Launched at the Cayon High School, the CARICOM initiative is sponsored by the government of Spain, and aims to reduce youth on youth violence.

Champions for Change President, Kiandre Weekes spoke of the mission and vision of the club, stating that it is devoted to the development of the Federation’s youth.

“The Champions for Change club does exactly what its name suggests; we are championing for positive changes. We are devoted to the development of our nation’s youth not only because we want to but because we need to. With the creation of the champions for change club, we are guided by the club’s motto: real actions resulting in real changes,” he said.

Minister of Education, the Hon. Shawn Richards encouraged the members of the club to make the changes promised in the club’s motto.

“The Champions for Change initiative is one which attempts to advocate against youth violence and promote safety and security within our schools but the members of the champions for change club you have a special job to do. You need to reach out to your fellow students and make the changes which are necessary,” he said.

The government of Spain is expected to discontinue funding in June of this year, and CARICOM expects the club become self sustainable.

CARICOM representative Beverly Reynolds appealed to the members and the teachers to keep the club active, stating, “This project comes to an end in June…a project without people to bring it to life; to give it legs and hands and above all, heart, is dead and lifeless and will remain on paper. We have to carry on. We have to continue providing encouragement and support.”

The Cayon High School was chosen as the pilot school for the programme in St. Kitts and Nevis.

The club has taken part in several activities since its inception in September 2015.

The initiative currently runs in 4 other countries across the region.