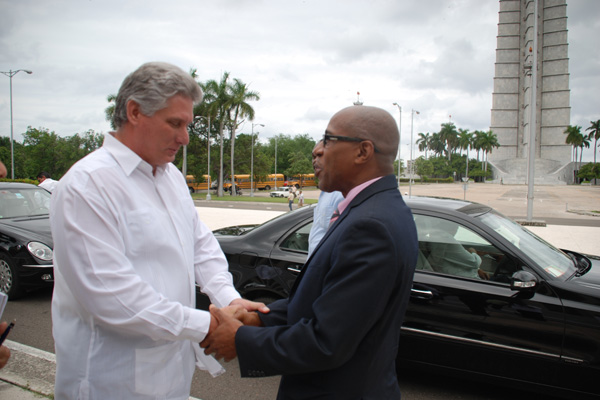 Basseterre St. Kitts — Today, the delegation from St. Kitts and Nevis had the honour of visiting the Director of the Latin American School of Medicine. During the visit, the Deputy Prime Minister, Honourable Earl Asim Matin had the pleasure of interacting with twelve students from the Federation of St. Kitts and Nevis. The students expressed their appreciation to the people of the Republic of Cuba and the government of St. Kitts and Nevis. The students also expressed some concern related to their stay at the University. The Deputy Prime Minister intimated that he and his delegation would express these matters with the line Ministry.

After concluding his visit to the University, the Deputy Prime Minister then made a courtesy call on the Vice President of Cuba, His Excellency Miguel Bermudez. The meeting was centered around matters related to health, agriculture, energy and trade and economic relations. The Vice President, who was briefed on the prior days activities, expressed that the Republic of Cuba will continue to show, in the spirit of solidarity, it support for the people of St. Kitts and Nevis. He also mentioned that the time has come for the Caribbean to consider a transportation system in an effort to improve connectivity between The Caribbean and Latin America. With a population of over 11 million, the Vice President mentioned that there is an untapped market that both islands can offer goods and services too.

Honourable Martin, in his closing statement mentioned that areas related to the development of renewable energy must continue to remain on the agenda of both countries. In the area of health care, with the assistance of the Cuban Government, Medicines developed in Cuba will be introduced in St. Kitts and Nevis that will seek to combat diabetes and its complications, in the field of agriculture, the Cuban experience with Organoponics will be replicated among the farming population of St. Kitts and Nevis. This method will help to ensure a sustained production of produce while at the same time ensuring food security for the people of St. Kitts and Nevis.

In light of this, the Vice President confirmed that the Republic of Cuba will seek to strengthen its bond of solidarity with St. Kitts and Nevis and do all in its powers to ensure that issues raised during the past few days will be made priority in the engagements going forward. He mentioned that while Cuba is undergoing changes in its Foreign policy, the spirit of Commandante Fidel Castro should guide our collective wisdom.

The commitments and friendship extended by the Republic of Cuba will surely serve to solidify the relationship between The Republic of Cuba and the Federation of St. Kitts and Nevis. The said relation is underpinned by the principles of equality, respect and solidarity.