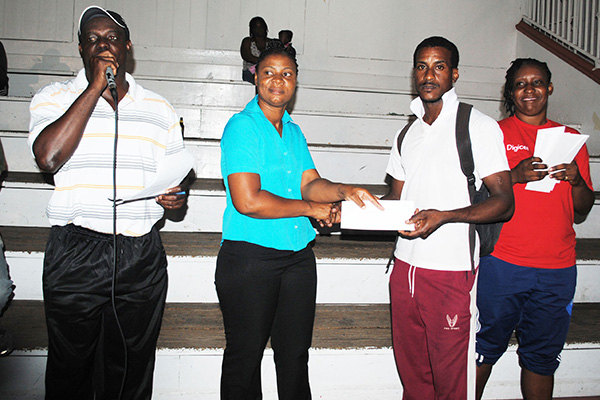 Charlestown, Nevis — The 2013 edition of the Development Bank of St. Kitts and Nevis/Nevis Department of Youth and Sports Tape Ball Cricket League came to a conclusion on Thursday evening (January 23), with Pennyless All Stars Male and Female teams taking the top honours.

Mr Curtis Morton, organiser of the league, thanked the Development Bank of St. Kitts and Nevis for accepting to sponsor the league at a short notice when approached last year. He explained it could not have concluded last year, as was the original plan, due to the nature of the festive month of December.

The finals for female and male teams were played at the Elquemedo T. Willett Park in Charlestown, where Pennyless All Stars Female Team faced the Rozel’s Team in the first of the two finals.

Summarised scores were Rozel’s Team made 61 for 8 with Melissa Clarke making 30, extras 20; Kel Williams 3 for 7 and Kerisha Powell 2 for 5.

In the much anticipated game two of the evening, Pennyless All Stars Males defeated surprise finalists, Rawlins Bush Wackers, by 49 runs.

Ms Hyacinth Pemberton, Acting Manager Nevis Branch of the Development Bank of St. Kitts and Nevis, who made presentation of cheques to the winners congratulated the Department of Youth and Sports for organising the successful league and the dedicated players.

“The Development Bank of St. Kitts and Nevis not only plays the role of a lender, but we have revealed on many occasions that we care about our communities,” said Ms Pemberton, who was accompanied by Ms Damella Dalton the Bank’s Archivist/Input Officer. “We are playing an integral part in the development of education, sports, other national events at the grassroots level, and the continued empowerment of our citizens in all spheres of life.

“The Development Bank of St. Kitts and Nevis is proud to have been a major sponsor of this event and it is our hope that from the seed sown through this sponsorship that Nevis will continue on its glorious path in the world of cricket where it has been a trailblazer since the days of Elquemedo Willett, whose name adorns this sporting facility.”

Permanent Secretary Ministry of Social Development, Youth and Sports in the Nevis Island Administration, Mr Keith Glasgow, while he made brief remarks said his Ministry was pleased to be organising the event as Nevis has a very strong cricketing culture.

“I realise the manager of the Development Bank referred to Elquemedo Tonito Willett, who was a trailblazer, and I want to say to all of you, I do not want Nevis’ cricketing culture just to be in the history books,” said Mr Glasgow.

“I want Nevis to have an enduring cricketing culture and so therefore, I wish to use this opportunity to commend all of the teams that would have participated in this tournament.”