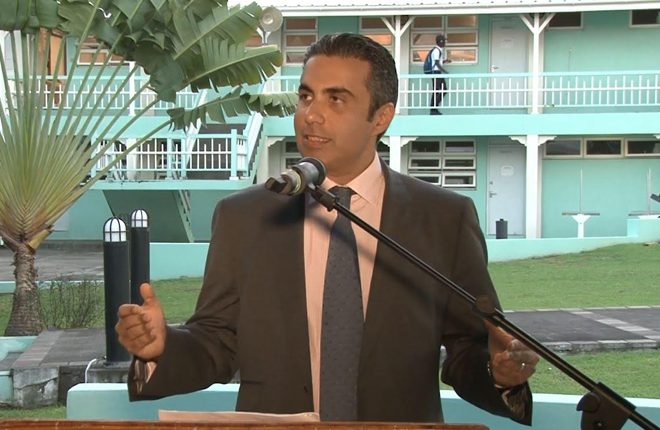 Economic benefit of Park Hyatt St. Kitts to be felt for generations

“Whether that is a 350 permanent employment opportunity created by the hotel’s ongoing operations or the ongoing taxes generated by the hotel, which is significant and substantial, almost on a more macroeconomic basis through enhancing the island’s tourism product, through the opening of Park Hyatt’s first Caribbean offering in St. Kitts, all these will result in a different type of tourist visiting St. Kitts and Nevis once the hotel opens, and the benefits of this transformational project must be felt across the island’s economy,” said Mr. Asaria.

The vice chairman said that Range Developments is on the verge of completing the hotel but the other stakeholders must work hard to ensure the economic benefits are not just felt by the hotel but across St. Kitts and Nevis.

Mr. Asaria reported that currently there are 850 workers onsite and another 50 in management positions all working late into the night to complete the project. He also reported that over 50 percent of the labour force is local.

Mr. Asaria said that Park Hyatt St. Kitts is a hotel investment through the St. Kitts and Nevis Economic Citizenship Programme and to date the project has contributed US $44 million to the treasury and is “paid money in government taxes.” The vice chairman said that once completed, that figure is projected to rise to US$55 million which is government payments and taxes through the various citizenship by investment fees.

“The project is a beacon of light to the industry, not just to the Citizenship by Investment Industry but also the tourism industry in St. Kitts and Nevis,” said Mr. Asaria. “On that note, Vogue, Forbes and the New York Times have lauded the development to date and has described the hotel as one of the most anticipated hotels opening in the current months. The Telegraph newspaper has described the Park Hyatt St. Kitts as the envy of Antigua and Barbados.”

According to Range Developments’ website, the hotel is an approved project under the St. Kitts and Nevis Citizenship by Investment Programme.

Once completed, Park Hyatt St. Kitts will be an ultra-luxury 5-star hotel and will be the first Park Hyatt in St. Kitts and the Caribbean.

Founded in 2011, the Range Developments is an investment and hospitality company, operating across the Eastern Caribbean. Its flagship project is Park Hyatt St Kitts- Christophe Harbour.