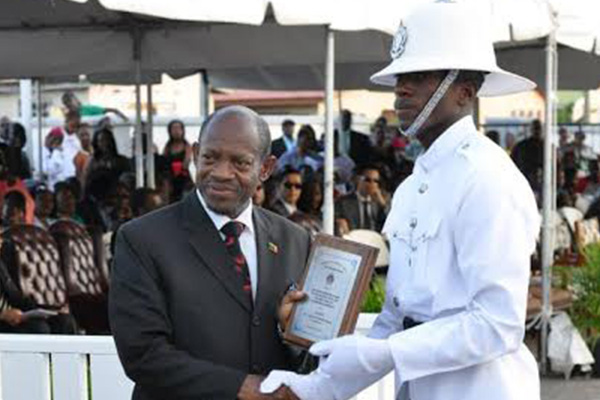 Basseterre, St. Kitts, (SKNIS) — The 36 police officers that graduated last Thursday (February 27) will officially begin to serve the public this week, some as early as today (March 03).

“I intend to be the best police officer that I can,” WPC Douglas exclaimed. [I will] “serve my country well and make sure that everyone, whether a resident or a visitor, are protected, … feel safe and are free to move about in the country.”

PC Hendrickson shared similar sentiments expressing his intention to work hard, acknowledging that many persons in the community look to the police for help.

Being a role model and serving the Federation is nothing new for the 22-year-old. In June 2012, he was recognized as the Best Recruit in the graduating class of the St. Kitts-Nevis Defence Force (SKNDF). However, he felt compelled to make a career change.

Hendrickson thanked Commissioner of Police Celvin G. Walwyn as well as Lieutenant Colonel Patrick Wallace and Captain Kayode Sutton of the SKNDF for allowing him to serve his country in a different capacity.

When he graduated last Thursday, Hendrickson earned awards for Best at Pistol Shooting, Best at Range, Best at Physical Training and Most Outstanding Student. WPC Douglas received the award for Best Results in Final Exams. The mother of two said that law enforcement is a good career choice for young people.

“It’s a lot of hard work,” she stressed. “It takes a lot of dedication. There are many sleepless nights but as long as you stick to your plan and you remain focussed on what you came here (to training school) for you will succeed at the end.”

Other persons awarded at the police graduation were No. 815 PC Cleon Rogers – Best at Rifle Shooting and Best at Self Defense, No. 830 WPC Caroline Hazel – Best at Drills, No. 804 PC Joash Liburd – Best at Police Subjects and No. 800 PC Oszin Rouse – Most Disciplined.