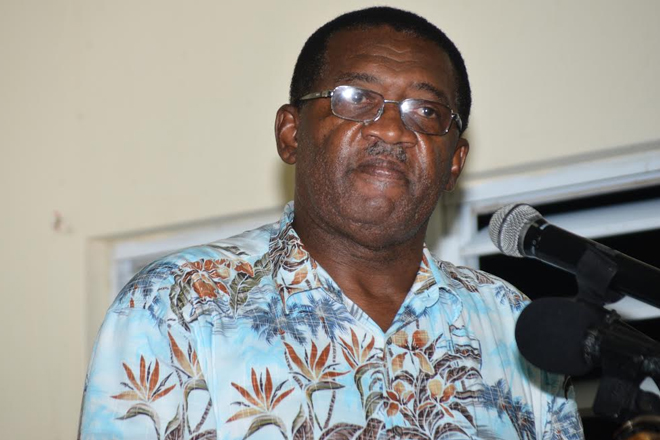 (SKNIS): In a recent “Discussions for Prosperity” town hall meeting at St. Peter’s Community Centre on August 16, Minister of Agriculture, Human Settlement, Co-operatives and Lands, Honourable Eugene Hamilton, addressed the recent concerns about the exportation of fish and fish being confiscated as persons were leaving St. Kitts and Nevis.

The minister said that the Government of National Unity is working diligently to ensure that St. Kitts and Nevis is compliant with the rules and regulations of fishing by December 31, 2016.

He explained that the European Union (EU) wants to prevent illegal, unregulated and unreported fishing.

“They feel that a lot of people are fishing in other people’s waters and that there is illegal fishing going on,” said the minister. “They want to know where the fish are caught because there may be instances of poisoning.”

He said therefore there is much pressure is on St. Kitts and Nevis and maybe for other reasons.

Minister Hamilton said that if St. Kitts and Nevis receives a penalty for non-compliance, it means there will be a loss in revenue.

“We are trying to protect that and also to protect the fishermen who want to ship any kind of fish products into Europe,” said the minister. “For the time being, we are prohibited from making any shipment of fish products into European countries like Guadeloupe and Martinique because they are considered part of France. But strange enough, there are at least four persons in the federation who purchase conch from those who catch conch and try to sell to those two countries in the vicinity of US $40 per pound.”

He said that the Government of National Unity is working assiduously towards not receiving any penalties so it will be able to apply to sell to Europe in order for those persons to properly sell their conch to Guadeloupe and Martinique without having to be sanctioned.

“That is why the pressure is on us to make sure that we comply with what the European Union wants,” said the minister. “So, when you hear that fish is being taking to the United States (US), you now have to get a certificate to certify that the fish you caught is where you say it was caught; it is to protect the entire fishing industry and to protect our country and its revenue.”

He said that while he understands the anxiety of getting a certificate for fish products, persons are urged to understand that it is important to protect an entire industry which serves more than 500 families in the federation.