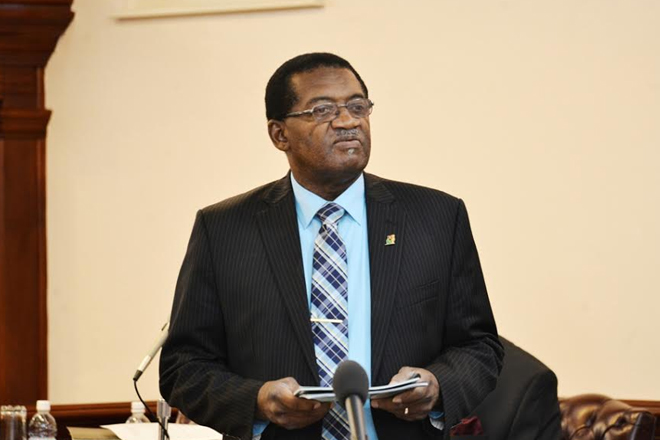 (SKNIS): The Honourable Eugene Hamilton, Minister with responsibility for Environment, said that a project which deals with biodiversity and habitat degradation is currently ongoing in the Federation of St. Kitts and Nevis, at a cost of US$3.4 million.

The project is funded by the Global Environment Facility (GEF) and executed by the United Nations Environment Programme (UNDP).

The honourable minister outlined the project’s objective during the sitting of Federal Parliament on Wednesday, March 23, at the National Assembly Chambers, Government Headquarters. He noted that the project is being handled by the Department of Environment and is projected to culminate in 2018.

“The objective, Mr. Speaker, of this project is to expand and strengthen the terrestrial and marine protected area systems and reduce habitat degradation in areas of influence, that negatively impact protected areas ecological functioning,” said Minister Hamilton. “Now there are some deliverables, Mr. Speaker, that are important to note, not only for yourself, but for the public, because during this phase until 2018, we expect to update National Conservation and Environmental Protection areas.”

Minister Hamilton stated that a self-financing agency will be established to govern the protected areas. He also stated that jobs will be generated as a result of the project.

“During the phase Mr. Speaker, we expect 30 jobs to be created and alternative livelihoods as well,” said the minister. “We expect various professional consultancies like legal, finance and ecological communications to be created as a result of this 3.4 million dollar project. Of course there will be local field workers. In the protected areas we have some jobs for both captains and of course marine conservation officers and park rangers.”

The environment minister pointed out that the jobs are currently being advertised so as to encourage persons to seize the opportunities available.

He noted that at least two vans and two boats will be made available during this phase in order to assist in the policing of areas that are to be protected. Training for local residence and fishermen will also be made available. “Of course in the overall scheme of things there will be the development of an implementation of a conservation plan,” he said.

He noted that a number of things will be done and a great deal of work will be carried out by the Department of Environment. The minister said that the strategy is for the control and management of invasive species such as the Green Vervet Monkeys and the Lion Fish.