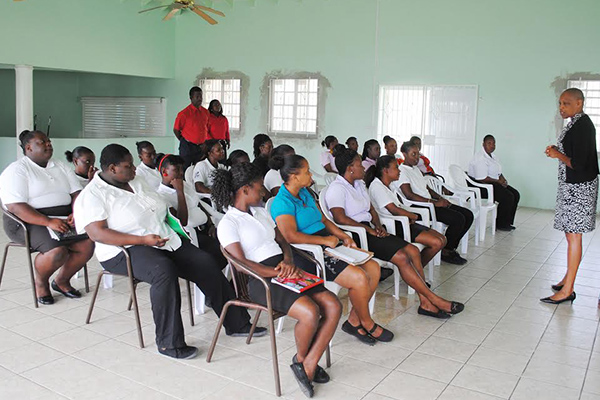 Basseterre, St. Kitts — Federal Minister of Health the Hon Marcella Liburd, when invited to talk to People Employment Programme’s hospitality trainees at the St. Johnson’s Community Centre Wednesday last week (February 5) on health issues, gave them much more than they had bargained for.

Minister Liburd started off her lecture by asking those in the room, including the facilitators and other PEP workers, how many had in 2013 visited a doctor not that they were sick but just wanting to know the state of their health.

“I want to encourage all of you… just to know what your health status is,” she pleaded. “Please consider this unselfish move to go and have a health status check.”

She informed them that the cost of treatment is much higher than that of prevention and encouraged them to start saving towards a health fund. She however told them that the government recognising that some people might not be able to save for such a fund, that it had decided to look at how it could nationally assist them to have insurance.

According to the Minister of Health, the first phase of the national insurance will cover low income earner and observed that most of the PEP workers fell in that category. She explained that they still needed to have their own funds as the insurance would only cover about 80 percent of cost for cancer treatment.

The People Employment Programme Trainees, through their representative Ms Aquila Bradshaw, thanked the Minister for the good news she had shared with them.

She pointed out that the Government of St. Kitts and Nevis under the Rt. Hon Dr Denzil Douglas was a caring one as it came up with the People Employment Programme that has taken a lot of young people from the streets and giving them training that will make them productive members of the society.

“Thank you very much to the government because without you I would not be having a job today,” commented Ms Bradshaw. “Thank you for introducing the People Employment Programme and thank you for giving us as PEP employees insurance and I think it is a very good policy and that it is very beneficial to the young generation out there.”

She said that with the training she has received, she has been prepared for the workplace and with the growing tourism industry along with her fellow trainees they are ready to go out and put in practise what they have learned, which will be another way of building the country.

Mr Michael Guishard, one of the two PEP facilitators for the hospitality class, said that the trainees were tackling the health, safety and security module of their training programme and decided to invite someone who not only understood the area of health but one who also understood policy matters.

“Last week we did invite the Minister for Health, the Hon Marcella Liburd, to lecture the students because we wanted her to actually get it across to the students as we are doing this module concerning health, safety and security,” explained Mr Guishard.

“The Minister delivered the message as we expected, and even added some of the policy issues the government takes to ensure the health of the people, and we were extremely happy to learn that there will be an insurance scheme that will look after the welfare of low income earners since the majority PEP workers fall in that category.”

Working alongside Mr Guishard in the Customer Service and Food and Beverage section of the hospitality training, as facilitator, is Ms Leslean Roberts who lauded Minister Liburd for covering so much in the one hour she talked to the trainees.