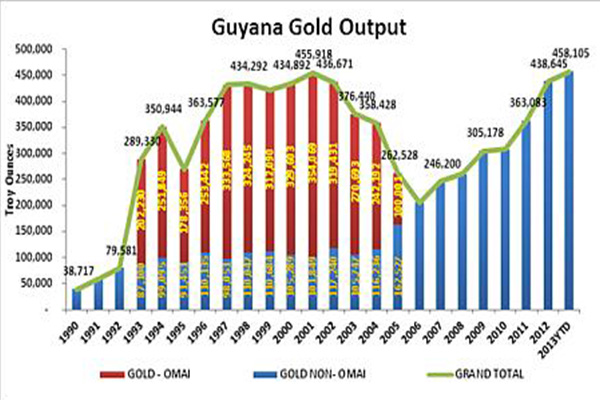 Georgetown, Guyana (GINA) — Guyana has recorded the highest ever gold declaration of 458,105 ounces as at December 16, 2013 surpassing the previous highest level of 455, 918 ounces in 2001; which included the declarations of both Omai and small scale operators.

This announcement was made by the minister of natural resources and the environment, Robert M. Persaud.

“This is a proud moment for all those who work in the sector. It shows dedication and commitment of the miners and also addresses the concerns about under declaration of gold or the claims of gold smuggling,” said Persaud.

The minister added, “The continuous increase speaks of the commitment and conformity of the sector to the laws and regulations. As such, all Guyanese must celebrate this achievement of small and medium scale miners.”

Further, Persaud stated that his ministry has been focusing on green development within the extractive sectors which is within our framework for a low carbon economy; this he said will be intensified in 2014.