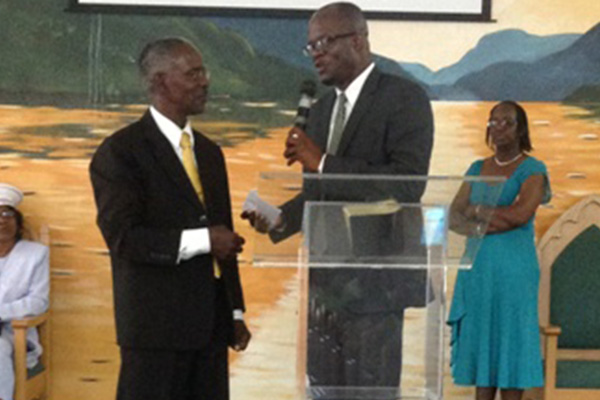 Charlestown, Nevis — St. Kitts and Nevis Minister of Foreign affairs and Federal Parliamentarian for Nevis 11 (St. James and St. Thomas Parishes), the Hon. Patrice Nisbett is celebrating the 14th anniversary as a member of the Federal Parliament with a week of activities.

Nisbett was first elected to the august body on March 5th, 2000.

The week of celebrations commenced on Sunday, March 2 with a church service at the New Testament Church of God in Jessups Village, and will run through March 9.

During the service, Hon. Nisbett addressed the congregation and thanked them for their support over the years. He also made a financial donation to the  the church and Pastor James Douglas received it on behalf of the congregation.

Other activities for the week will include a visit to the sick and elderly, throughout St. James and St. Thomas parishes on Monday, March 3.  On Tuesday, March 4 the Hon. Nisbett will do a constituents meet and greet throughout Nevis 11.

On Wednesday, March 5 a Town Hall meeting at the Franklyn Browne Community Center from7:30pm.  Singing will be in full gear as Minister Nisbett will be hosting a Karoke Night at the Cherry Tree at Barnes Ghaut from 8pm on Thursday, March 6.

Friday, March 7, Minister Nisbett will have a grand opening of his constituency office in St. James Parish starting at 4:30pm.  A Health and Legal Fair will take place at Camps Ghaut from 8am, and a Domino Competition with a grand prize of $1000 at Squeeze Dem Up Bar in Bricklyn from 12noon, both events will take place on Saturday, March 8..

The week of celebrations will culminate with a worship service at the Eden Browne Church of God (Butlers) from 10:30 am on Sunday, March 9 followed by a beach picnic from 2pm at Oualie Beach.

The Hon. Patrice Nisbett, who in addition to foreign affairs, also has responsibility for homeland security, labour and legal affairs in the Federal Parliament said Sunday, he believes that he has worked long and hard for the good people of Nevis, and he hopes to continue giving many more years of quality service in years to come.

Among Nisbett’s many accomplishments on behalf of the people of Nevis, is the distribution of laptops to students at the first and second form levels of all secondary schools, financial assistance to women in business, financial assistance to students for university education, scholarships given to primary school students, and a slew of legislation including the Long Service Gratuity Act.