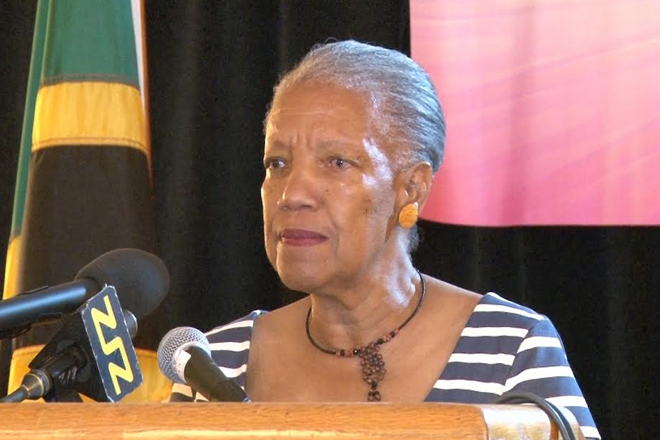 (SKNIS): The Department of Gender Affairs in the Ministry of Community Development, Gender Affairs and Social Services is working toward sensitizing both males and females in order to achieve gender parity which lends toward the development of St. Kitts and Nevis.

This is according to Director of Gender Affairs, Celia Christopher, who outlined that the International Women Day (IWD) Schools Sensitization Campaign which took place March 7 –18, was an ideal event to carry out this mandate.

“In pledging for parity you need allies to get you to that point (equality), and so we have to continue to involve our men, to make them part of the conversation,” Mrs. Christopher said. “I am very happy when the schools decided that we can speak to the assemblies. In that way, we were able to speak to both boys and girls—so they got a sense of what their responsibilities are as they become adults.”

This year’s IWD activities were held under the theme “Pledge for Parity” which falls in line with the United Nations 2030 Sustainable Development Goal number five of achieving gender equality and empowering all women and girls.

One of the presenters at the IWD Schools Sensitization Campaign Jihan Williams, Deputy Registrar of the High Court and Deputy Clerk of National Assembly, revealed that she thoroughly enjoyed her experience with the students.

“It absolutely needs to be continued,” she said. “We need to really get this whole notion of equality into as many spheres as possible, school not being excluded. Again, a lot of times when we think about it (equality), we think about – women versus men, men versus women, but I think sensitization campaigns such as this one (IWD) will help a lot in showing us that it’s about working together, and making sure that everybody has a fair chance at excelling and being the best person that he or she can be.”

Similarly, another presenter, Asha Desuza, Foreign Service Office Officer, in the Ministry of Foreign Affairs and Aviation, noted that the opinions of more students needed to be aired.

“I definitely think it’s a programme to be continued annually throughout the school year, perhaps in smaller groups, where the interaction could be a bit more direct,” she said. “And to give the students that space or that opportunity to interact and not just to listen. I understand that in an assembly you would not feel too comfortable asking certain questions, but in a more private and smaller setting you may be more encouraged to.”

Mrs. Christopher outlined that upcoming activities pertaining to sensitization would include more than just students.

“Yes I believe we ought to be doing more in the schools, in terms of gender sensitization,” she said. “To this end we are looking at a project that we will be rolling out, later in the year. That is going to take us around the country doing some gender sensitization, in communities, in schools, to Non Governmental Organisations (NGOs), civil society, the public and private sector.”

Mrs. Christopher asked for the cooperation of the general public as her department continues to ensure that it works toward gender equality through gender sensitization.